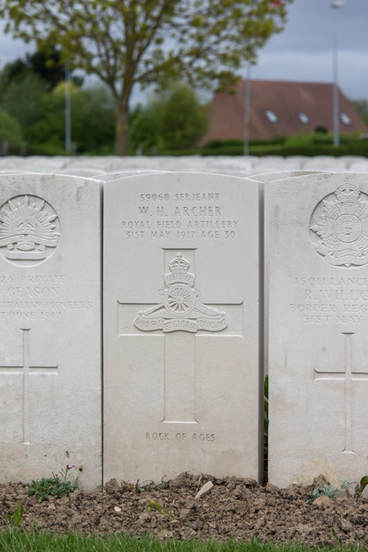 
William Henry ARCHER was born on 21 February 1887 in Wellington, the son of Henry James and Minnie Emma Archer, and a birth notice was published two days later in the Evening Post.

Minnie (or Annie, the name on her birth registration) was born in 1867, the daughter of John and Emma Kear.  John was a miner from Gloucestershire and had married Emma Gwynn there in 1854.  The couple had three children in England, but only their four-year old daughter Alice lived to make the journey with them to New Zealand aboard the Captain Cook in 1863.  Emma died in 1870 and John was killed in a mining explosion in Greymouth just seven years later.

Henry and Minnie were living in Rolleston Street when William was born, and three years later William’s sister Ruby Ila was born in 1890. Also living in the same street at the time were Henry's father and his uncles Benjamin and George.   Sometime between 1896 and 1897, the extended family moved to the Brooklyn area, with Henry and Minnie living at 118 Washington Avenue.  Henry’s obituary in 1941 states the family were “among the first to take up residence in Brooklyn, at that time looked upon as remote and almost inaccessible”.

Henry worked at various occupations at this time - as a labourer, brickmaker, and by 1911 he was working as an office cleaner.  Minnie was listed in the Register of Midwives from 1906 to 1909.  A registered midwife had to hold an approved certificate of training in midwifery, or (as Minnie had done) have been in practice as a midwife for at least three years and be of good character.

Their son William left Brooklyn sometime before 1909. He travelled to England and worked as a steward on the Lusitania, and lodged in Liverpool with the Scott family, comprising  Albert (an undertaker), Caroline his wife, and their children. The Lusitania was a British ocean liner, and at one time the world’s largest passenger ship.  Her maiden voyage was on 7th June 1906, and she sailed the Liverpool to New York route.  The Lusitania was sunk on 7th May 1915 by a German U-Boat off the coast of Ireland, with the loss of almost all the passengers and crew onboard[1] . This event contributed to the entry of the USA into WW1.

On 26th February 1909, Albert Scott saw William off on the tender, under the impression that he would be sailing on the Lusitania.  The next morning Albert’s wife Caroline disappeared, and at the beginning of April she and William were arrested in London, where they had been living together.  The couple were taken back to Liverpool and charged with the theft of two gold rings.  Albert stated he was willing to take Caroline back and police agreed to withdraw the charges on the understanding that the expenses of the prosecution would be paid.  Albert Scott subsequently paid the £10 expenses.

Caroline had been born in Ferozepore, Bengal (India) on 15 November 1873. On her sixteenth birthday she married Albert Luke SCOTT in Agra, Bengal. Albert was eight years her senior and originally from Cambridge.  Their first child, William, was born in Agra, and then the family moved to England, where eight further children were born.

The reconciliation between Albert and Caroline did not last long, as a marriage between William H Archer and Caroline L Scott was registered in the December quarter of 1910 in the district of Hartley Wintney, Hampshire.    At the time of the 1911 census, the couple were still in Hampshire, living in Sandy Lane, Church Crookham.  William had enlisted in London with the British army and was a gunner with the Royal Field Artillery.

On the outbreak of war, as a member of the regular army, William was one of the first to be mobilised.  His military service record was part of the 70% of British army service records that were destroyed by bombing during World War II.   However, his medal roll index card gives some clue as to his war service.  12 days after Great Britain declared war on Germany  William was in the Divisional Ammunition Column (DAC) in the 1st Division which landed in France on 16 August 1914.  He had been promoted to Bombardier by this time (a rank in the artillery between Gunner and Corporal).  DACs were responsible for transporting munitions from the divisional parks to the brigade dumps. The Brigade Ammunition Columns (BACs) then moved the ammunition forward to the horse lines and gun batteries.  The DAC and the BAC were amalgamated in May 1916.

The 1st Division remained on the Western Front for the duration of the war, taking part in most of the major actions including the Battle of Mons (August), the Battles of Marne and Aisne  (September), and the First Battle of Ypres in October that year.  In 1915 they were involved in the Battle of Aubers (9 May) and the Battle of Loos (September - October).  The Division also took part in the Battles of the Somme in 1916.  Though his medal roll index card indicates William stayed with the 1st DAC for his entire service, the register of soldiers' effects lists him as a sergeant with “A” Battery in the 52nd Brigade.  Both the 1st DAC and the 52nd Brigade were in the same area in May 1917.

On 13th and 14th May the 1st DAC had marched to Borre where they were billeted in the village and neighbouring farms.  They spent the following week refitting, then on May 24th marched overnight to Reninghelst via Strazele, Bailleul and Locre.  Over the ensuing week, they took up working parties for batteries, and transported ammunition to battery positions.

A battery was a unit of a number of guns each of a single type size and weight. When deployed for action the battery would be set up behind the front line within range of the enemy.  All guns were horse drawn so once the battery was positioned, usually in a line of a section of 3 or 4 guns, the horses and supporting wagons would be withdrawn to the rear out of range of enemy artillery fire. These were the wagon lines where the horses were kept and food prepared.  Each night the guns and men would be resupplied with ammunition and rations by wagons from the wagon lines under cover of darkness.

The 52nd Brigade had travelled by train to Poperinge on May 25th and then marched to the wagon lines out of Ouderdom. On May 30th, the batteries moved into position between Dickebusch Lake and Voormezeel, with one gun per battery left at the wagon lines in reserve. At midday on May 31st, all batteries were in action.  It was on this day that William died of wounds.

On the following day, the 52nd brigade war diary notes:
Total casualties in this Brigade since 9.5.17 are Officers 1 Killed and 4 Wounded O[ther] R[anks] 15 Killed and 108 Wounded

Soldiers dying of wounds were buried in cemeteries created near the dressing station, casualty clearing station or hospital where they died. William is buried at Bailleul Communal Cemetery Extension, Plot 3 row B grave 200.

The register of soldiers’ effects lists William’s sole legatee as his widow Caroline Archer, and on 1st November 1917 a payment of £7 19 shillings and sixpence was paid to her, for money owing to William, and possibly including proceeds from the sale of some of his kit to fellow soldiers.

The army also paid out a war gratuity. Eligible personnel were soldiers with war service overseas or more than 6 months’ service at home.  The amount varied depending on rank, and with additional payments for length of service. On 6th January 1921, a war gratuity payment of £19 was made to Mary Agnes Mace, Caroline’s sister.

Sometime after William had left for France, Caroline moved from Hampshire to live in Sheffield, where she practised as a midwife. After William’s death, she began living with William Paisley, a steam waggon driver, and they married on July 26th 1919 at Eccleshall Registry in West Yorkshire. Caroline reportedly suffered from depression, and committed suicide by ingesting Lysol on November 27th.  (The subsequent inquest brought to light Caroline's first husband Albert and Paisley's first wife, both still living. Paisley was later convicted of bigamy.)

Although the army had paid the war gratuity to Caroline’s sister, the Commonwealth War Graves Commission's final verification form lists William’s parents as his next-of-kin.  After the end of the war, the Commission sent out hundreds of thousands of verification forms to next-of-kin, seeking confirmation of the details it held and additional information where needed. By this time Henry and Minnie were living in Fearon Street, Blenheim, where Henry was custodian of the Government buildings there.

As well as their confirming their son's details, there was an option to have an inscription placed on the base of William's gravestone.  A fee of 3 ½ pence per letter up to a maximum fee of one pound was payable, though this fee was later dropped and unpaid fees were not necessarily pursued.  The inscription on William's headstone reads “Rock of Ages”, the title of a popular Christian hymn, with a fee of 2 shillings and 11 pence being charged to his father Henry for the 10 letters.[2]

On Henry’s retirement, he and Minnie moved from Blenheim to Levin around 1930 and lived at Bath Street West. Henry died in 1941 and his ashes were interred at Karori cemetery, with his memorial plaque inscribed “Rock of Ages”.  His obituary noted that “his only son William was killed in the Great War”.  Minnie lived in Levin until she died in 1959.  William's sister Ruby married twice but had no children and died in Levin in 1984.

William Henry Archer is remembered on the Brooklyn War Memorial with his name inscribed W.H.Archer.

Researched and written by Margaret Gaffney

[1]  The sinking of the Cunard ocean liner RMS Lusitania occurred on Friday, 7 May 1915 during the First World War, as Germany waged submarine warfare against the United Kingdom which had implemented a naval blockade of Germany. The ship was identified and torpedoed by the German U-boat U-20 nd sank in 18 minutes. The vessel went down 11 miles (18 km) off the Old Head of Kinsale, Ireland, killing 1,198 and leaving 761 survivors. The sinking turned public opinion in many countries against Germany, contributed to the American entry into World War I and became an iconic symbol in military recruiting campaigns of why the war was being fought.
https://en.wikipedia.org/wiki/Sinking_of_the_RMS_Lusitania

[2] Families of British soldiers buried in Commonwealth War Grave Commission cemeteries were allowed to add an inscription to their son’s headstone. The New Zealand government banned all such inscriptions as it felt the payment issue went against the equality for all principle.