Robert Alexander SINCLAIR was the only child of Archibald Conal (often spelt Connel/l) McPhail SINCLAIR and Hope (nee Mason) SINCLAIR. Archibald was born in Quarter, Hamilton, Lanarkshire, Scotland in 1863 and arrived in New Zealand in 1874 with his mother and seven siblings on the "Soukar". Their husband/father, Daniel, was supposed to follow his family to New Zealand, but never did, remaining in Scotland working as a miner.

Archibald married Hope MASON (who had lived in the Wellington area all her life) at Knox Church, Lower Hutt on 8th November 1887. His brother John had married Hope's sister Julia in 1882. Hope and Julia were daughters of John Augustus and Jane Mason, long standing settlers of Lower Hutt.

Archibald and Hope's only child, Robert Alexander, was born at 23 Rintoul Street, Newtown, Wellington on 30 January 1889. Living next door at 25 Rintoul Street were John and Julia Sinclair and their family.

By 1896 Archibald, Hope and their son had moved to Brooklyn. Archibald was a carpenter and builder.

Robert attended Vogeltown, Te Aro and Brooklyn schools between 1894 and 1900. According to his attestation papers he participated in Nelson College Cadets but enquiries to this college, and also at Wellington College cannot find him enrolled at either place. What is known is that after he left school he became a builder, possibly at first working for his father. He was self-employed by the time he signed up in June 1917

In January 1915 Robert had been examined and rejected as unfit for service by Dr Harty of Wellington due to chest trouble. However, in 1916 Robert was on the New Zealand 1st Division Reserve Roll of Wellington. At the time he was a self-employed builder living with his parents at 9 Hayes Street, Brooklyn. 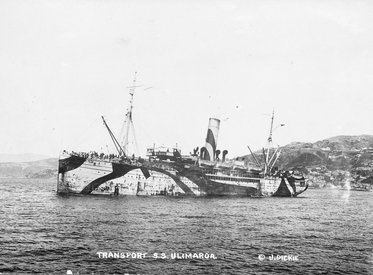 Transport S.S. Ulimaroa c. 1919 J. Dickie (State Library of Victoria www.slv.vic.gov.au)
Robert married Martha Elizabeth (known as Elizabeth) BULLEN at St Mark’s Church, Wellington on 18 April 1917.  She was the daughter of Martha Elizabeth and William Bullen, and was born in 1886. After they married Robert and Elizabeth lived at 2 Hobson Street in Thorndon which was their address when Robert enlisted at Wellington on 12 June 1917. Robert was given the service number 80886  in E Company  of 41st Reinforcements. He was described as ‘apparent age’ 29 years 4 months old, though as with so many other men, his date of birth was incorrectly recorded as 30 January 1888 on his attestation papers. He was 5 foot 11 inches tall, with fair complexion, grey eyes and brown hair. His religion was Church of England. When medically examined at Trentham on 18 April 1918 Robert was declared to be in good bodily and mental health and free from any physical defect that was likely to interfere with the efficient performance of his duties. His only ‘defect’ was an in-growing toe nail due to hammer toe.

﻿ Robert was in New Zealand with the 3rd Battalion Otago Regiment until 26 July 1918. He embarked on HMNZT 108 as one of 1,004 men on the “Ulimaroa” which departed on 27 July.  On arrival in London on 4 October 1918 Robert was seriously ill with influenza and he was transferred to the Military Hospital at Tidworth, Wiltshire on the 16th October. The Hospital was at the Tidworth Military Camp, 30 kms west of Sling Camp, and not far from Stonehenge and Salisbury.

By the 21st October Robert had slightly improved but on the 22nd October he was described as dangerously ill and diagnosed as having bronchopneumonia. In another five days he died, on 27 October 1918 at the age of 30. Robert was never to see any action in the field but as the Armistice was signed only 15 days after his death it is most unlikely that he ever would have made it to a battlefield.

The Commonwealth War Graves Commission has the following information about the Tidworth Military Cemetery: During the First World War, the cemetery was used for burials from Tidworth and Fargo Military Hospitals and the 417 graves, many of them of Australian or New Zealand servicemen, are scattered throughout the cemetery. There are 106 Second World War graves in the cemetery, two substantial groups of which can be found in sections F and D. The rest are scattered. The cemetery also contains 40 war graves of other nationalities, many of them Polish.[1]

Robert’s death was noted in the Evening Post of 4 November 1918:

Two years later he was again remembered in the Evening Post on the anniversary of his death:

Robert posthumously received the Plaque and Scroll and British War Medal which were sent to his widow Elizabeth at 95 Tasman Street where she was living with his parents in October 1920. His parents moved to Mahina Bay, Eastbourne later in the 1920’s, and lived until 1952 when Hope died, and 1953 when Archibald joined her in Taita Cemetery.

Elizabeth never remarried and passed away in Wellington on 3 April 1944, having remained a widow for 26 years. She was buried in a Church of England section of Karori Cemetery.

Research conducted by Ann Walker with supplementary input by Barbara Mulligan. Thanks also to Rod Sinclair, a descendant of John Sinclair, for providing family information. 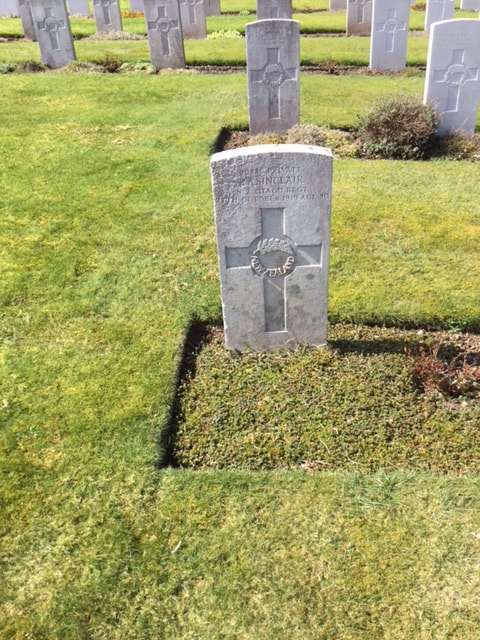 Grave 244, Plot C, Tidworth Military Cemetery, Wiltshire. In April 2018 the inscription on the headstone was hard to read, but it was clear that the date of death was incorrect - 27 October 1919! The Commonwealth War Grave Commission have been advised, and confirm they will change the date, though it may take 18 months before it will finally be correct. Photo Barbara Mulligan April 2018