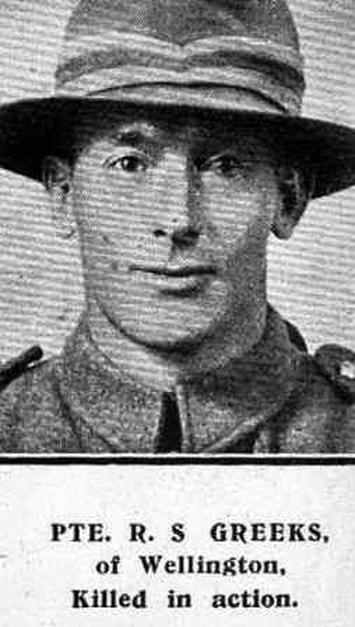 This photo appeared in the Auckland Weekly News in 1917, and the caption is incorrect - Raynor died in hospital of gunshot wounds and was therefore buried. His brother Claude was killed in action and his body was never found.
RAYNOR STEPHEN GREEKS

Raynor, the fourth child, and second son of Richard and Eliza Greeks, grew up in Brooklyn where he attended Vogeltown School (later renamed Brooklyn School) from 1891 to 1900.  Raynor shared his father and brothers’ enthusiasm for sports, playing at different times for Star, Athletic and Melrose Football clubs.

Attestation records show that in September 1914 Raynor had been rejected as unfit for active service because he had varicose veins.  However, in October 1916, it was a different story - Raynor passed his medical – no varicose veins!  Raynor is described as 29 years of age, 5ft 7in, 156 lb, with light brown hair, brown eyes and a fresh complexion.   He was employed as a storeman with D Virtue & Co, flour merchants, was single and was living with his parents at 18 Hayes St, Brooklyn. His younger brother Claude had signed up 6 days previously.

After initial training at Featherston, Raynor left New Zealand in February 1917 with the NZEF, F Company, 22nd reinforcements on HMNZT 77 S.S. Mokoia.  During the voyage Raynor took part in a boxing tournament in the heavy weight division – he won one bout and lost another.

The troops arrived in Plymouth on 2nd May 1917 and marched into Sling camp, Wiltshire, the same day.  After only one month’s further training, in June 1917 Raynor embarked for Etaples, France, where he joined his battalion in the advance on and capture of Messines. It rained throughout July and conditions at the front were utterly miserable. In addition Raynor was gassed and received treatment during August, being admitted to No 3 NZ Field hospital for seven days. Perhaps he received word during this time of the death of his younger brother Claude, killed on 6 August.

In October the New Zealand Division embarked on the Third Battle of Ypres, successfully taking the Gravenstaefel Spur at Passchendaele. This period marked the blackest day for the New Zealand Division, with the 2nd and 3rd (Rifle) brigades suffering around 3,700 casualties in a disastrous attack on Bellevue Spur, Passchendaele, on 12 October. Raynor was amongst those shot that day, taking a serious gunshot wound to his thigh. He was admitted first to No 1 NZ Field ambulance and transferred four days later to No 6 General Hospital, Rouen. His leg had to be amputated, but this wasn’t enough to save him and he died on 17 October, aged 30 years, exactly one year and one day after he signed up for active service.

During the First World War, Commonwealth camps and hospitals were stationed on the southern outskirts of Rouen. A base supply depot and the 3rd Echelon of General Headquarters were also established in the city. Almost all of the hospitals at Rouen remained there for practically the whole of the war. They included eight general, five stationary, one British Red Cross and one labour hospital, and No. 2 Convalescent Depot. A number of the dead from these hospitals were buried in other cemeteries, but the great majority were taken to the city cemetery of St. Sever. In September 1916, it was found necessary to begin an extension, where the last burial took place in April 1920. Raynor is one the 8,348 Commonwealth soldiers buried in the St Sever cemetery extension, Rouen.

His parents received his war medals, the British War Medal and Victory medal and a plaque and scroll.