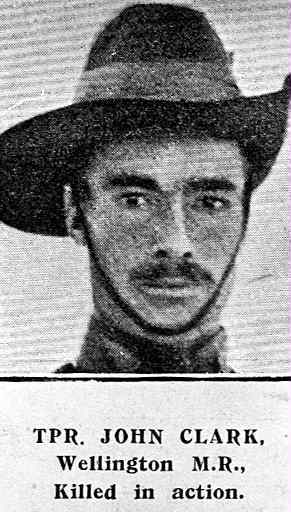 Trooper John Cameron CLARK was 35 when he went to war in 1915. Information on his life up to then is scarce, and his military personnel file is lacking in detail. His name is on the Newlands Memorial, but there is no obvious connection between Trooper Clark and the Johnsonville/Newlands area. He was however one of many men who died at Gallipoli, in his case after being in the field for less than two weeks. He seems to have left little by which he can be remembered. His Christian and surnames names make it difficult to trace him as there are often multiple John Clark records, and this difficulty is compounded by his parents both having common names as well. The following story reflects this lack of publicly available information about him.

Trooper John Cameron Clark was born 21 October 1879 in Glasgow, Scotland. He was the eldest son of John and Jane Clark, and had three younger sisters (Elizabeth, Jane and Margaret) and a younger brother (William). John (senior) was born in Condorrat, a weaving community on the eastern edges of Dunbartonshire. Condorrat is now part of the new town of Cumbernauld. John’s occupation is shown on the UK census records is tinsmith and gas fitter. John and Jane and their daughters appear to have immigrated to New Zealand in 1897, leaving Plymouth on the Shaw Savil and Albion ship Ionic on 14 April, bound for Wellington. It is though not known when John made his way to New Zealand.

By the time John signed his attestation papers at Trentham on 29 December 1914 he was a single man aged 35, living and working in Okato, Tarankai, where he was a self-employed plumber. He had attained the equivalent of the Fourth Educational Standard at school, and had served for four years with the Egmont Mounted Rifles and then the 9th NZ Contingent for twelve months.

His physical description on his attestation papers record that he was 5 foot 6 inches tall, 36 inch chest measurement, had a dark complexion with light brown eyes and black hair sprinkled with grey. He had good eyesight and hearing, normal heart and lungs, well-formed limbs, and was free of hernia, varicose veins and haemorrhoids. He agreed to be vaccinated, and it was noted that he had a deformed tip on the ring finger of his right hand.  So with no other “slight defects” he was passed fit to serve.  His religious beliefs were that of the Presbyterian Church.  He left a will with the Public Trust.
John was posted to the Wellington Mounted Rifles and was promoted to Lance Corporal in February 1915. Two months later on 17 April 1915 he embarked at Wellington as part of the NZEF 4th Reinforcements which sailed as HMNZT 21 (“Willochra”), 22 (“Knight”) and 23 (“Templar”) which between them were carrying 2,254 soldiers. They arrived in Suez between the 24th July and the 6th August 1915.

By now it was clear that more men were urgently needed for the stalled campaign on the Dardanelles Peninsula, where the attrition rate from death, injury and illness was high.   There was little time for further training for John and his fellow recruits, and within 2-3 weeks John was landed at the Dardanelles, on 16 August 1915. Just five days later the “last major assault of the Gallipoli Campaign was launched on 21 August 1915 to coincide with the attack on Scimitar Hill made from the Suvla front by General Frederick Stopford's British IX Corps. Hill 60 was a low knoll at the northern end of the Sari Bair range which dominated the Suvla landing. Capturing this hill along with Scimitar Hill would have allowed the Anzac and Suvla landings to be securely linked.

Two major attacks were made by Allied forces, the first on 21 August and the second on 27 August. The first assault resulted in limited gains around the lower parts of the hill, but the Ottoman defenders managed to hold the heights even after the attack was continued by a fresh Australian battalion on 22 August. Reinforcements were committed, but nevertheless the second major assault on 27 August fared similarly, and although fighting around the summit continued over the course of three days, at the end of the battle the Ottoman forces remained in possession of the summit.”[i]

John was probably amongst the New Zealand Mounted Rifles (NZMR) allocated to the assault of Hill 60.

On 27 August 1915 John was one of many reported missing, at Anzac Cove, Gallipoli, Turkey.  Of those killed, many were unidentified, or their bodies could not be found. A Board of Enquiry was convened on 17 January 1916 at the NZ Mounted Brigade Headquarters at Zeitoun, Egypt to formalise the status of those who were “missing” after the Gallipoli campaign. The findings of the Board record that John had been “Killed in Action”.  A copy of this Board of Enquiry was sent to John's father.

John was entitled to the 1914-1915 Star and the British War Medal which were sent to his father on 3 October 1921. The Memorial Scroll was sent 1 June 1921, and Plaque on 10 November 1921 followed by the Victory Medal on 11 August 1922. This sequence of deliveries must have been poignant reminders for his father, by then living in Dargaville, of his son’s short but fatal service.

Because John has no known grave his name is on the New Zealand Memorial at Hill 60 Cemetery, Turkey.   “HILL 60 CEMETERY lies among the trenches of the actions of Hill 60. It was made after those engagements, and enlarged after the Armistice by the concentration of graves from Norfolk Trench Cemetery and from the battlefield. There are 788 burials and commemorations in the cemetery. 712 of the burials are unidentified, but special memorials commemorate 34 casualties known or believed to be buried among them.”[ii]

The HILL 60 (NEW ZEALAND) MEMORIAL is one of four memorials within the Hill 60 Cemetery erected to commemorate New Zealand soldiers who died on the Gallipoli peninsula and whose graves are not known. This memorial relates to the actions at Hill 60. It bears 183 names.

John's younger brother William Clark was also killed in action, on 8 June 1917, and his name is on the Messines Ridge (New Zealand) Memorial, Belgium. 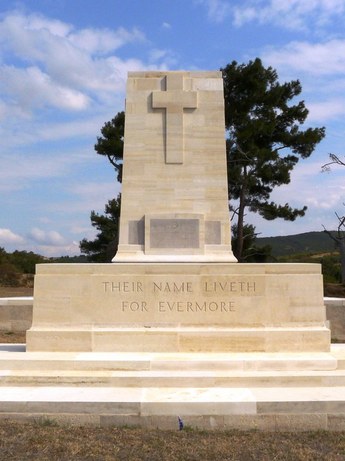