On 12 November 1885 Harriet Eliza HAMBLY married Charles DONEY in Christchurch. The presiding minister was Reverend H B Redstone, who was the brother-in-law of the bride.  The groom was from Woodville, and his father’s name was also Charles.

Charles Doney the groom had, like his father been a blacksmith in a mine in Cornwall until he left for New Zealand on the Ballarat, arriving in Napier on 15 September 1872. He set up in business as a blacksmith in Hawke’s Bay and his parents and some of his siblings joined him in early 1875, having arrived in Auckland on 28 December 1874 on the Assaye.[1] Father and son went into business together in Woodville, trading as C Doney & Son. A brother Thomas joined the company which became C Doney & Sons, but in 1882 this arrangement was dissolved, and the business was renamed Doney Brothers. (Hawkes Bay Herald 30 October 1882.

Harriet was the youngest daughter of James Hambly, a master mariner, also from Cornwall. She too was born in or about 1850. Her path and Charles’s crossed somehow, and on 12 November they were married in the United Methodist Free Church in St Asaph Street, Christchurch. According to their marriage certificate, Charles was 35 and Harriet 34. Her father was deceased but Charles Doney (snr.) was still alive.  Charles Doney (snr) however died the following year.

Two years after the marriage Harriet and Charles had their first daughter, Elsie Edith Kate, followed by Minnie in 1888. Their only son, Harold Charles, was born on 7 June 1890, in Hastings, and another daughter, Elizabeth Ada, completed the family in 1894. Their father, Charles, was still trading as a blacksmith, and the family lived in Hastings.

When Elizabeth Ada was only two years old her father died, and the Hastings Standard of 26 August 1896 reported his death thus:
“The funeral of the late Charles Doney yesterday afternoon was one of the largest seen in the district, the cortege being fully half a mile long. The service at the grave was feelingly performed by the Rev. Dr. Hosking.”

Two days earlier the following somewhat sad item had also been reported in the Standard:
“Reference was made last evening at the Wesleyan Church by Dr Hosking to the death of Mr Charles Doney. Mr Doney was one of the oldest members of the Church and was an old townsman. Feelings of sympathy were expressed for the widow and four fatherless children, who are in somewhat indigent circumstances. The Doctor announced that he had received offers of financial assistance and hoped that Mr Doney's many friends would come to the help of his widow under the painful circumstances. Some £2 or more were received and other promises made - Mr Bissell offered his services in the near future with the limelight bi-unial lantern and two lady lecturers, and it is desirable that the matter be taken up heartily. Anyone wishing to subscribe will please forward their amounts to Dr Irving.”

Charles, although well-liked and respected had obviously not been able to put money aside, so his widow would have been facing significant challenges to support herself and four children with the loss of their breadwinner.

Harriett, however, seems to have been an enterprising woman, who moved her family to Wellington and set up a shop at 52 Courtenay Place. She was registered to vote at this address in 1900, and her occupation was “storekeeper”. She was still registered at this address when the 1905-06 Electoral Roll was compiled, and in 1911 she was resident in Helen Street, Brooklyn, along with Minnie, Elsie and Harry. By 1914 the family was registered at 44 Hawker Street, Mount Victoria although they also seemed to have an address in Brooklyn – 1 Sugarloaf Road.

Harry, and presumably his sisters too, was educated at Clyde Quay School. On leaving school he started working for Blundell Bros., publishers of the main local newspaper, the Evening Post. He worked for them for 10 years. However, by the time he signed up for active service in June 1917, Harry was already a soldier, with the NZ Defence Force, and was doing garrison duty at Fort Ballance, a coastal artillery battery on Point Gordon on Wellington's Miramar Peninsula.[2]

Harry’s medical examination record reveals he was just over 5 ft. 7 inches tall, had black hair and dark brown eyes; that he had suffered from pleurisy and pneumonia when a 3-4-year-old; had a slight varicose vein on his left leg; had suffered from pneumonia again in 1914, but was nevertheless fit for active service. In September 1917 he was in camp as a Private but in November he was transferred to NZ Field Artillery as a Gunner.

Until 10 July 1918 Harry was in training at Featherston Camp and then presumably at Trentham before embarking on the SS Tahiti as one of the 40th Reinforcements, a group of mostly replacement troops under Lieut. Colonel R C Allen. Including the troops, support staff, and ship’s crew there were 1217 people aboard.

The SS Tahiti, the 5800-ton ocean liner famous as the ‘death ship’ of 1918, was built in Scotland in 1904. Purchased by the Union Steamship Company of New Zealand in 1911, with the start of the First World War she entered service as a troopship.[3]
“Passing an uneventful voyage around southern Africa, on 22 August the Tahiti met her convoy group at Freetown, the capital of Sierra Leone. Upon arrival the officers aboard received reports of illness in Freetown, which had just become infected by the deadly second wave of the 1918 influenza, and those onboard were prevented from disembarking. This did not prevent local workers from resupplying the ship as it waited in harbour, however. Since influenza can be infectious for a day before symptoms appear, these workers could have felt fine and still spread the disease.

The influenza is thought to have been brought to Freetown by the HMS Mantua, an armed cruiser which had developed influenza onboard two days after leaving an infected London on 1 August. Unfortunately, this was the vessel which hosted a meeting of all the wireless operators and captains from the ships in the convoy. Having attended the meeting aboard a still infected Mantua, the captain and the wireless man likely brought the infection back to the Tahiti.

The Tahiti left Freetown on 26 August, heading in convoy to Plymouth, Great Britain. This is also the day when the first cases of influenza reported to the ship’s hospital. The worst day for the outbreak onboard was three days later, with more than 800 people, two-thirds of everyone aboard and including both doctors, were sick with influenza. This shows how infectious this disease was, and how quickly it could be transmitted in a crowded environment. Eventually roughly 90% of those on the Tahiti became ill from influenza, or 1100 of the 1217 people onboard.”[4]

By 2 September men had started dying and burials at sea were becoming a frequent event. Harry was one of those who became ill. He died on 5th September and was buried the same day. His death was one of 42 during the three days since the 2nd of September
“By the time she arrived at Devonport on 10 September 68 men had died and a further nine died afterwards[5], an overall mortality rate of 68.9 persons per 1,000 population. It is estimated that more than 1,000 of those on board had been infected with the disease. A later enquiry found that mortality was worst in those over 40 years and that those over 25 had a higher mortality than those under 25. Mortality was also higher in those sleeping in bunk beds rather than in hammocks. The conclusion of the enquiry was that overcrowding and poor ventilation had contributed to the exceptionally high infection rate and death toll. It was one of the worst outbreaks worldwide for the 1918/19 pandemic in terms of both morbidity and mortality. “

Harry’s mother must have been notified soon after his death, and an item appeared in the Evening Post on 17 September:
News has been received of the untimely death of Gunner Harry C. Doney, aged 28 years. He died at sea on his way to the war owing to influenza, and he was buried at sea on 5th September. Gunner who was the only son of Mrs. Doney, of Brooklyn, was born at Hastings, and was educated at the Clyde Quay School, Wellington. On leaving school he was employed at the Evening Post for about ten years. He then went on service, first garrison duty at the forts, and later entering camp in September 1917. After some time in camp he was finally drafted to the 40th N.Z.F.A.

Harry was memorialized in several places. His name, date of death and “died at sea” are inscribed on the headstone on a family plot in Karori Cemetery. His mother died in 1943, aged 92. His sister Minnie, who seems never to have married and died in 1958, is also remembered in the inscription on the headstone. Elizabeth Ada, the youngest daughter, who also never married, was cremated at Karori in 1967 and her ashes were interred in the family plot too, but no addition was made to the inscription on the headstone. [6]

Harry is also named on the Memorial Arch in the Services Section of Karori Cemetery, along with the other 28 men from the Wellington district who died on the SS Tahiti and were buried at sea. They are named amongst men “who enlisted from the Wellington district and who died and were buried at sea between NZ and the overseas bases 1914-1918” according to the inscription on the Memorial.

Harry’s name is of course also inscribed on the Brooklyn War Memorial. His mother and sisters resided in SugarLoaf Road, Brooklyn, probably from at least 1911. Their home therefore was a matter of a mere few hundred metres from the memorial on the rise of Sugar Loaf hill.

Researched and written by Barbara Mulligan 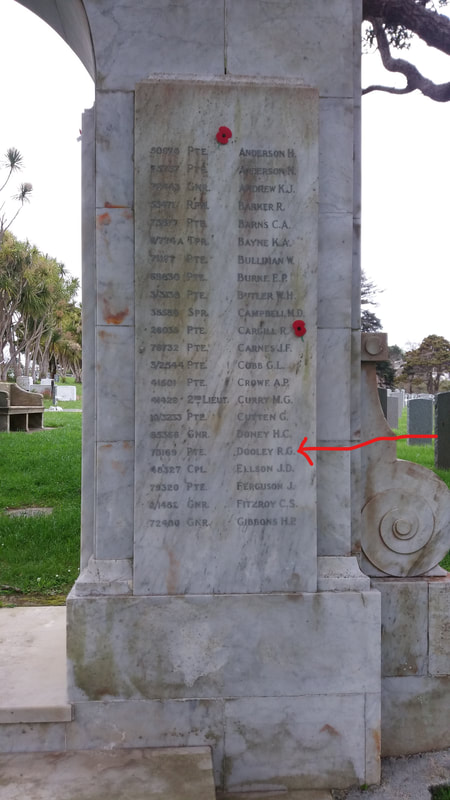 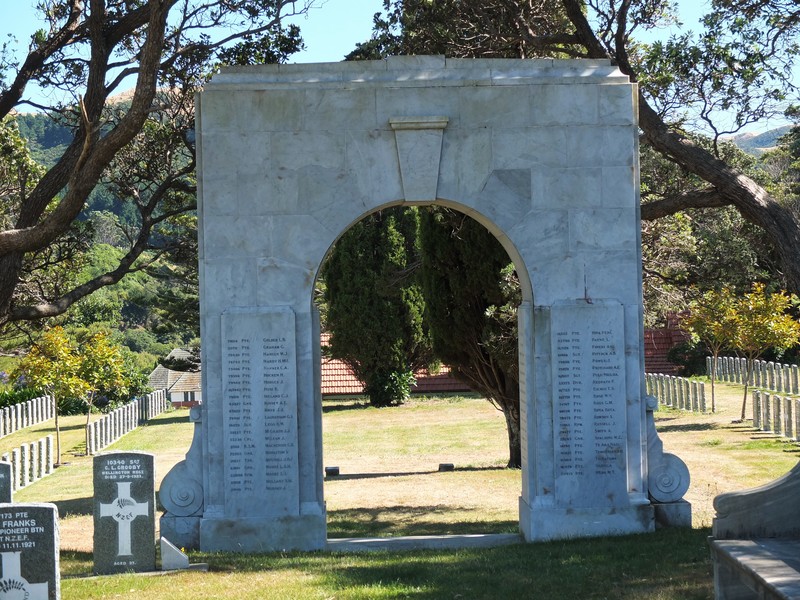 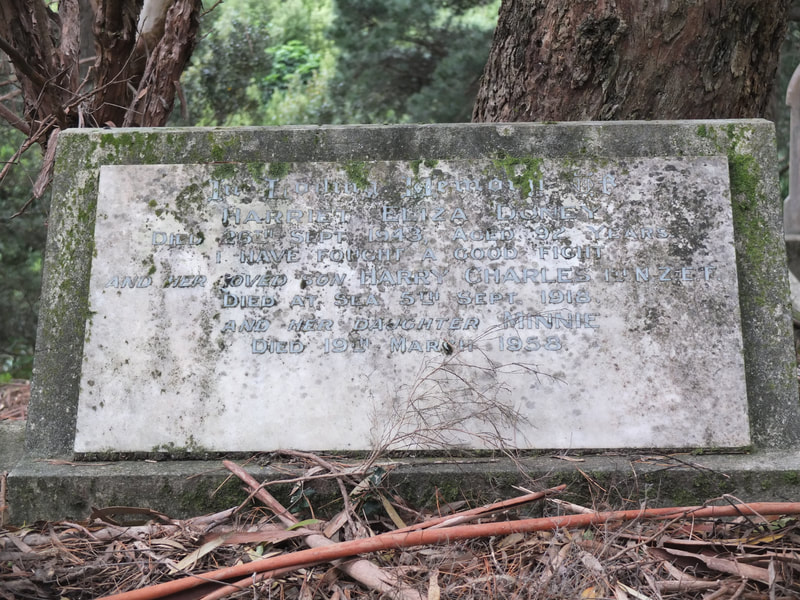