Ernest George BRIANT was the second son of George and Elizabeth Briant (nee BAIN) who were married in Wellington in 1895. George had arrived in Otago with his parents Joseph and Sarah and his sister Elizabeth in 1874 on the SS Buckinghamshire. Another sister, Henrietta, was born shortly after arrival, but sadly died four months later. Joseph remained in Dunedin till his death in 1898. According to Electoral Rolls he was a builder.

George seems to have been a stoker in the early years of his marriage. In the 1896 Electoral Roll he and Elizabeth are registered living in Little Taranaki St, central Wellington. Little Taranaki Street ran between Dixon Street and Ghuznee Street and is now Egmont Street (the lane which passes through the Hannah’s shoe factory site in the centre of Wellington). George was again registered at this address in 1900. In 1902-3 and again in 1905-06 he is registered at Thorndon Avenue (Thorndon Quay?). His occupation continues throughout this period to be that of stoker. He may have worked for a shipping company and been at sea, or he may have had a land based job at one of the facilities around Wellington such as the Gas Company, or the Evans Bay Power Station.

However, Elizabeth appears in the Electoral Rolls in1900 as resident in Johnsonville, and again in 1905-06. Her occupation is “domestic duties”. Six children were born to the couple between 1896 and 1908:

In 1911 George is listed in the Electoral Rolls for the first time as “farmer, Paparangi” (Wellington City & Suburbs Rolls). Elizabeth died on 3 May 1911 after a long illness. Her death notice in the Evening Post makes it clear that she and George were farming in Paparangi.  George may have been one of the working men who got a 2 hectare (5 acre) lease-in-perpetuity section on which they could grow fruit and vegetables and keep pigs, bees and fowls after Ceres Selina Drake sold the Crown Grant of 332 acres to the Crown on 3 August 1897 and it became the Paparangi Estate, one of the Small Farms Settlements of Richard Seddon’s Liberal Government. Perhaps the farm had been managed by Elizabeth until she became ill and George had to give up his work as a stoker and stay closer to home to care for her and the family.

Elizabeth was buried in the cemetery of St John’s Anglican Churchyard Cemetery in Johnsonville, which was leveled in the 1960's because of disrepair and overgrowth .

Mrs George Rigalsford is George’s only sister, Elizabeth.  Perhaps Elizabeth supported her brother with child care after her sister-in-law’s death.  Obviously she and her husband were close to Albert as they also placed an In Memoriam notice in the Evening Post the following year on the anniversary of his death. 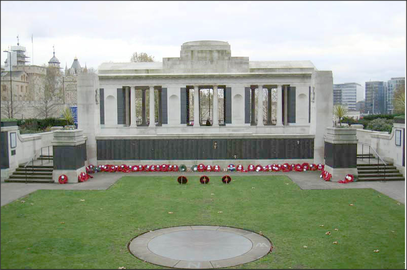 Tower Hill Memorial, London (Commonwealth War Graves Commission photo)
Ernest may have followed his father by going to work as a seaman, though no records have yet been unearthed to establish this as a fact. He didn’t enlist with the NZ Army any time after the outbreak of WW1, nor have any records been found for him in any UK regiment. The only information that has been found about him is an inscription on the Tower Hill Memorial in London. This memorial commemorates men and women of the Merchant Navy and Fishing Fleets who died in both World Wars and who have no known grave.  The Memorial stands in the gardens in Trinity Square, which is also the location of Trinity House. It is also in close proximity to The Tower of London[i].

The inscription to Ernest tells us that he was a greaser when he died on Friday 8th June 1917. A greaser is responsible for lubricating the moving parts of engines on steam vessels, thus ensuring constant efficiency and effectiveness of all moving parts of the machinery. Apparently Ernest was working as a greaser on the SS Huntstrick when it was torpedoed NW of Morocco by U-boat 39 on 8 June 1917. The SS Huntstrick, which was built by Workman, Clark & Co. Ltd. in Belfast in 1902 and owned at the time of her loss by F. C. Strick & Co Ltd, London was a steamer of 8151 tons.  At the time she was torpedoed she was on a voyage from London to Salonica, Greece with a cargo of government stores and troops, including a motor launch, ML541. It seems Ernest was one of 15 men who died as a result of the attack.

The Commonwealth War Grave Commission record for Ernest states that he was born in Wellington, New Zealand. This strongly indicates that the man so named on the Tower Memorial is indeed the son of George, farmer of Paparangi. He is recorded as 19 years old, which matches Ernest’s birth date of 1897.

No death or In Memoriam notices for Ernest have been traced. Presumably his father was informed, but there is no record of any medals being sent to him or of anything which would confirm categorically the connection between George, farmer of Paparangi, and Ernest, greaser, SS Huntstrick.

George continued to farm in Paparangi with his second wife Amy Louisa until they moved to 51 Tauhinu Road, Miramar before the 1928 Electoral Roll was published. George continued to live there after Amy died in 1932, but moved to Paremata sometime in the 1940's, before ending his days at the Ohiro Benevolent Home, Ohiro Road, Brooklyn in 1953 aged 87. The Home was for those with limited financial means who were aged and infirm, and was often the last residence of seamen who had fallen on hard times. He, Amy, and two infants born to them in 1919 were also interred at St John's Anglican Churchyard Cemetery in the family plot.

Update: 31 March 2018
The Tower Hill Memorial is immediately visible when one surfaces from the Tower Hill underground station on the Circle or District lines. The main part of the Memorial is approximately 300 metres from the Tower of London, and faces Trinity House, which is a huge and ornately decorated building on the north side of the Memorial grounds which are well-planted and maintained. The plaques on the Memorial are arranged by the name of the ship. The SS Huntstrick plaque is towards the south end of the memorial, near the top of one of the panels, about 15 feet, or 5 metres, above ground level. It is unlikely that anyone will ever have noticed Ernest's name unless specifically looking for it amongst so many others, and unless those who looked knew he was a seaman on the SS Huntstrick. The only way to distinguish Ernest's name, other than by using binoculars, or climbing a ladder, is to take a photo and then enlarge it. The photos added to this page are sufficiently clear to show Ernest's name.

It was a privilege and a pleasure to find Ernest's name amongst so many others, and to be able to take a satisfactory photo or two to share with anyone reading his story.


[i] Incorporated by Henry VIII on 20 May 1514, the Corporation of Trinity House has a long and storied history in service of the mariner as a leader in maritime safety and navigation. It also has a statutory duty as a General Lighthouse Authority to deliver reliable, efficient and cost-effective aids to navigation service for the benefit and safety of all mariners. It is therefore entirely fitting that the Memorial to those who died at sea during WW1 and WW2 should be nearby. 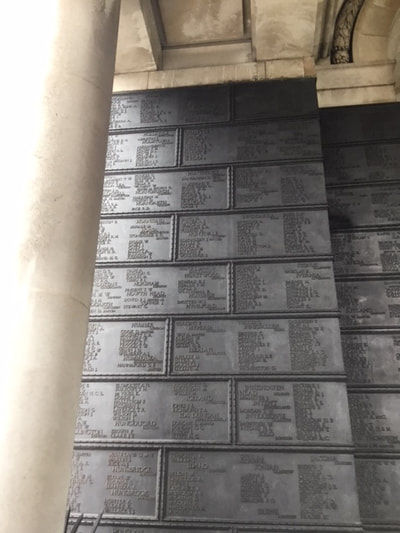 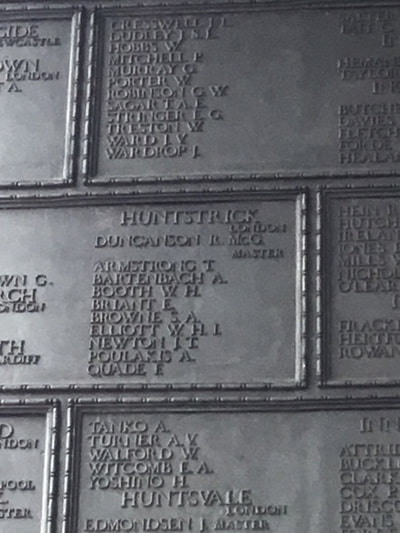 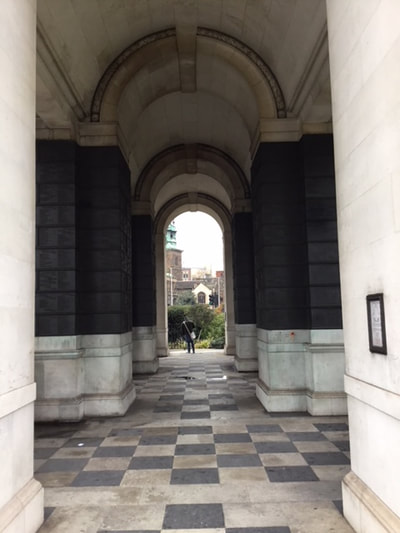 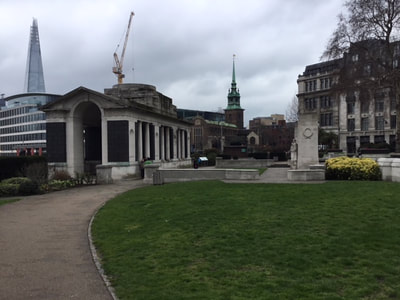 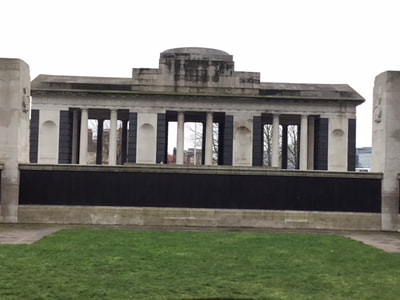 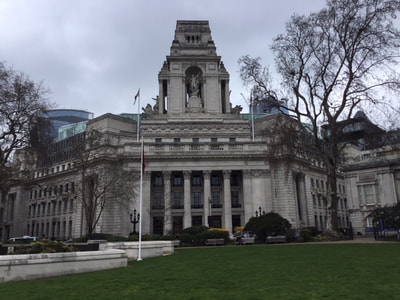 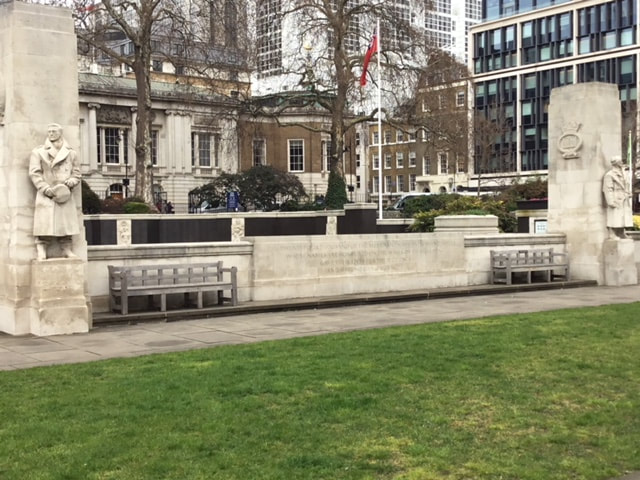