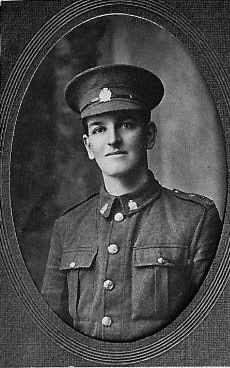 William Edward RAMSAY was one of two men from Makara (the other was Pedersen/Petersen) born outside New Zealand. William was born on 24th December 1893, at Baltasound, on the island of Unst, one of the North Isles of the Shetland Islands. He was the eldest son of William Thomas Ramsay, a fisherman, and Janet Barclay Ramsay (nee Thomson), who married in March 1892. William’s brother Laurence was born in 1896 and his sister Janet in 1897. Two further sisters, Jemima Catherine and Gladys Ann, and one brother, Charles Sandison, were born in 1902, 1904 and 1908 respectively.

William appeared in the 1901 Scotland census aged 8, residing with his family at Scraefield, in the parish of Unst.  By 1911 he was nearby, working as a farm labourer for William Jamieson, a widower, at Gatesgarth. However, a declining herring fishery, and poor work prospects in the Islands, led William and his brother Laurence to take the bold step of immigrating to New Zealand. They left London in the ship “Orsova” on 24th Oct 1913, bound for Sydney, arriving on 26th Nov 1913. They probably arrived in New Zealand in late 1913 or early 1914, as William later stated on his enlistment that he had been in New Zealand for three years. Laurence found work milking cows at Konini, near Pahiatua in the Wairarapa district, while William found work at Makara, working initially on the Sievers farm.

In late 1916 or early 1917, William received news of the death of his father, William Thomas Ramsay. He had drowned at Baltasound on 21st December while serving as part of the home guard for the Shetland Islands. Laurence, who had signed up for war service on 29th August 1916, was already on his way to England aboard the “Port Lyttleton” and may have received the sad news once he arrived at Sling Camp.

By 1917, William was employed as a farmer labourer by Mr Wickman of Karori, Wellington. Adolph Alexander Woldemar Wickman was born in 1856 in Finland (as Vickerman). Known as “Charlie”, he married a local Karori woman, Alice Kilmister in 1888 and had a farm and dairy in the vicinity of Parkvale Road. Alice was one of the 10 children of John and Sarah Kilmister whose property “Sky Farm” dominated the hills behind Karori Cemetery.

Although William was single, by 1917 he was seeing Hilda May Waller, who is remembered by the Ramsay family as using the Ramsay surname though they never married. She is co-listed, with William’s mother, as his next of kin on his military papers (she was referred to as his ‘friend’). Hilda was living with her sister, Fanny Sievers, before the war. Fanny was married to William Louis Sievers, the brother of Louis William listed on the memorial. Hilda appears to have taken many years to recover from William’s death. In 1926 she married Samuel Edward Monaghan, Harry Monaghan’s brother (another Makara sacrifice).

William was called up as part of the 7th Ballot in May 1917, enlisting on the 17th May at Wellington. William was just a ½ inch under 6 foot, weighed 154 pounds, had brown hair and blue eyes and a ruddy complexion, no doubt caused by his outdoor work on farms. His medical file also reveals that two years before enlisting he had a ‘lung’ issue and it was thought that he was suffering from TB but it seems that this was ruled out.

William’s name was listed in the Evening Post and New Zealand Times as one of the men of the Wellington City (#5 group) who went into camp in late June as part of the 31st Reinforcements. The men assembled at the Drill Hall in Buckle Street on Wednesday 27th June.

At the Drill Hall, the Camp Commander, Major A.A. Corrigan, addressed the men and informed them that it would be the last time that there would be a distinction made between volunteers and balloted men; henceforth they would be treated equally as members of the New Zealand Expeditionary Force. The next day, the New Zealand Times reported:
“This morning, the Wellington quota for the 31st Reinforcements, who were provided with accommodation at the Drill Hall, Buckle street, last night, after being regaled with coffee, biscuits, and bread and butter, will assemble and march to Lambton railway station, where they will entrain for Trentham.”

The draft was equipped at Trentham and then sent on to the segregation camp at Tauherenikau (a satellite camp between Featherston and Greytown) for one month's training, and then divided between Featherston and Trentham. Although Tauherenikau was a permanent camp, the term ‘segregation’ was used because the camp had medical facilities that allowed men suffering from various conditions to be segregated from the rest of the men, e.g. VD,  TB, mumps, measles, flu etc. Tauherenikau was very useful to alleviate the crowding at Trentham particularly when Trentham had some serious health scares. C1 men i.e. those deemed not fit enough at the time of enlistment but who would become so after receiving special fitness training were sent to Tauherenikau.

William was enrolled as a private in the Wellington Infantry Regiment, B Company, New Zealand Expeditionary Force. He was enrolled with the 30th Reinforcements on 26th June 1917 and then was transferred to the 29th Reinforcements on 27th July 1917. Men were often moved around, based on the need to fill quotas. While he was in Featherston Camp William suffered from tonsillitis, being admitted to Racecourse hospital on 14th July and discharged on 25th July 1917. He was fully recovered in time to leave Wellington with his fellow soldiers of the 29th and 30th Reinforcements on Wednesday 15th August, in the “Ruahine”, bound for Glasgow. 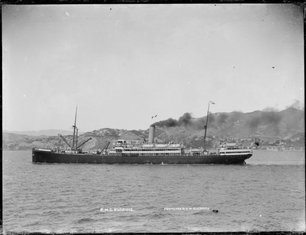 The “Ruahine” arrived at Glasgow on Tuesday 2nd October 1917.  The voyage took longer than normal, because of German submarine activity en route. The men were then sent south to Wiltshire by train, arriving at Sling Camp on Wednesday 3rd October 1917.
At Sling William was attached to the 4th Reserve Wellington Infantry Regiment and spent 12 weeks in further training (3rd October 1917 to 26th December 1917). At the camp he was, like all new troops, introduced to the current tactics used by the enemy on the Western Front which it was hoped would better prepare him for surviving life in the front lines. For example, he would have been instructed in the trench warfare techniques that had evolved during the previous months, training for gas attacks, dealing with artillery bombardments, night work and so forth. During his time at Sling he was ill, and while his file doesn’t record the nature of the illness, given the extreme wintry conditions at the time, and the harsh environment of Sling Camp it was very likely bronchial in nature. He spent two weeks and three days in the Tidworth Military Hospital (9th to 26th November 1917).
William was back with his unit on the 26th November. Exactly a month later, on Boxing Day 2017, he left for France.  While his file doesn’t show it, he likely landed in Marseilles and after the usual five-day train journey through France arrived, via Rouen, at the NZ Reinforcement camp Étaples, near Boulogne, where on 30th December 1917 he was attached to the strength of the New Zealand Infantry and General Base Depot (NZI & GBD). This was the chosen route to the Western front because it afforded the greatest protection to new troops and didn’t clog up the Channel ports that were used for medical evacuation, munitions, and food supplies etc. for troops in the front lines. And in 1917 German submarines were very active in the channel area.

Entrenching battalions provided labouring parties to assist units such as tunnellers, pioneers, railways, engineers and signals. The New Zealand entrenching battalions dug trenches and other earthworks, and became a reservoir for the Division, receiving men from all branches of the service. The men who served in these battalions were the work horses of the Army. While they were trained as infantry and knew how to fight, their value was in their physical labour, building and maintaining the fighting and communication trenches. They often worked under fire and were therefore very vulnerable to capture, injury or death. Large numbers of New Zealanders in these battalions became prisoners of war.

William was posted to the 1st Entrenching Battalion on 26th March 1918 and then the 2nd Entrenching Battalion on 29th March 1918.
The 1st and 3rd Entrenching Battalions were sent to the Somme, but the 2nd remained at Abeele. On the 12th April it was rushed south to Meteren to construct and garrison a line behind the village. Meteren fell to the Germans on 16th April after considerable fighting, and two companies of the Battalion were hard pressed to retreat in time. Jim Leys was one of those fatally wounded in this action. The battalion had received orders and was making its final preparations for entraining at Poperinghe to re-join its group in the south, when the German attack developed on the 25th April. The battalion was sent up into support of the Division behind Dickebusche. 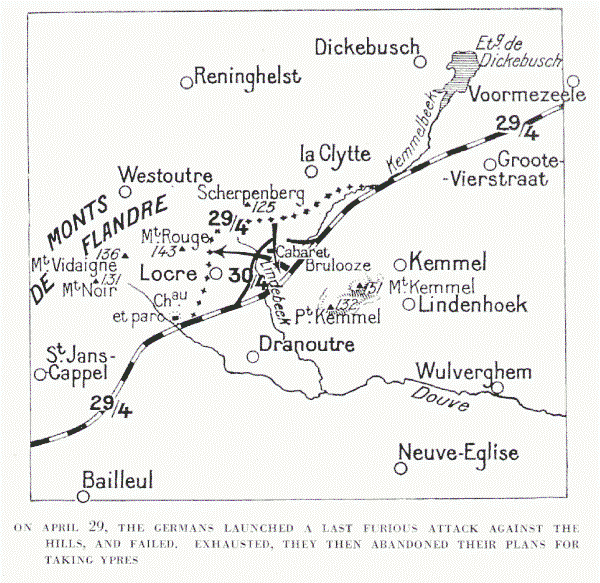 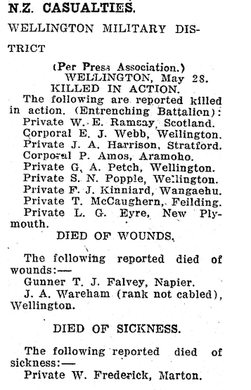 According to the Battalion casualty records, William Ramsay was the only man in the Entrenching Battalion who was killed on Saturday, 4th May 1918. He may have been the victim of a trench mortar or grenades (rifle/hand), rather than an artillery bombardment, which would have resulted in multiple deaths.

His death was reported on 28th May 1918 in the New Zealand newspapers. 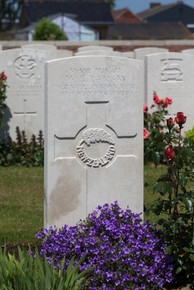 William was buried at La Clytte Military Cemetery, Heuvelland, West-Vlaanderen, Belgium, grave reference V. B. 10. La Clytte is a small village just over 7 kilometres south and slightly west of Ypres, and 3 kilometres south of the village of Dikkebus (called Dickebush(e) at the time).

There are 1,082 casualties of the First World War buried or commemorated in this cemetery.  Of these, only three are from New Zealand
William made a will, which was dated 10th August 1917, witnessed by another soldier in the Reinforcements, J. C. Dale [46829] who was also on board the “Ruahine”, and a Ted Brooke, described as a Wellington civil servant.  The sole beneficiary was his mother, and he left just over £97 in cash which was in his Post Office Saving Bank account. This would have been about $2,018 in 2017. (http://www.saving.org/inflation/inflation.php?amount=97&year=1917).

Laurence Ramsay survived the war, returning to New Zealand in 1919. His descendants in New Zealand still keep in touch with family in the Shetland Islands, and William is still remembered.

Both William and his father feature in Shetland’s Roll of Honour, their photos side by side on page 99. Their names are also on a memorial plaque at the Baltasound church.


Family members in Scotland retain the original of a Memorial card printed after his death.