William and Catherine (nee McKenzie) McKENZIE married in 1864.Their first two children both died before the age of two. They had another nine children, who all survived to adulthood. William senior was a shipwright who had immigrated to New Zealand from Scotland. He died in 1909 aged 79 years.

William Henry was born in Auckland on 28 October 1869, fourth child of the family, although by the time of his birth he had only one surviving sibling. There is very little information available about William Henry’s early life, other than his attendance at Devonport School from 10 June 1876 to an unknown date.

As an adult he had his own business as a bootmaker. In 1895 at the age of 26, he married Annie FOGERTY, an immigrant from Scotland, at a Presbyterian Church in Wellington. Annie was born in Glasgow on 10 March 1872. The only child of the marriage, Henry, was born on 3 October 1898 in Devonport, Auckland. In 1900 the family was living in Devonport, as were William’s parents and younger brother, Harold Falconer.

William, Annie and Henry appear to have moved to Wanganui for a short time before moving to 61 Hopper Street, Wellington sometime during the early 1900’s, as Henry attended Mt Cook Infants School from 1 August 1904 until 4 October 1904.  The family then moved to Cleveland Street, Brooklyn, and Henry was enrolled at Brooklyn School until 30 October 1907. William and Annie may have separated at the end of 1907, as from then on, though William continued to live at 33 Cleveland Street, Annie was living at 53 Victoria Road, Devonport Auckland.  On the 1911 Electoral Roll, William was sharing his house in Cleveland Street with his brother Harold and sister-in-law Winifred Alice (nee Barnard) who had married in 1906

William was still living at 33 Cleveland Street, Brooklyn when he enlisted at Trentham on 12 January 1915, aged 46.  He attested to his wife’s residence at Victoria Road, Devonport. He was by then aged 46, so well over the enlistment age. His attestation papers state he was 5 feet 5 inches tall and weighed 156 pounds. His complexion was fair, and he had blue eyes and grey hair. He gave his religious profession as Church of England. His medical examination showed him to have good eyesight and teeth, normal hearing, heart and lungs and he was free from hernia, varicocele, varicose veins, haemorrhoids and inveterate or contagious skin disease. He was pronounced fit for Samoa and given the registration number 19/168.

William was in infantry training at Trentham from 12 January 1915 before embarking with the Samoa Relief Force on 20 March 1915. This Force was created to maintain a garrison presence in Samoa for the duration of the war following the “capture” by the Samoa Advance Force on 29 August 1914.  The Advance Force, numbering c. 1,300 men, were withdrawn from Samoa in April 1915, and many of those men then went on to fight at Gallipoli, in the Sinai and eventually on the Western Front. The Relief Force numbered c. 350 men, many of whom were not fit for more active service, or who were, like William, rather older. The Relief Force was maintained as a garrison force which had little to do other than “make work” and the maintenance and operation of the wireless station on the main island of Upolo.

William was attached to the Wireless Station. He remained on duty in Samoa for three and a half years, with one 2-month period of furlough in New Zealand from 15 February to 30 April 1917.

On 15 July of 1915, William committed the first of what would become a lengthy list of misdemeanours: 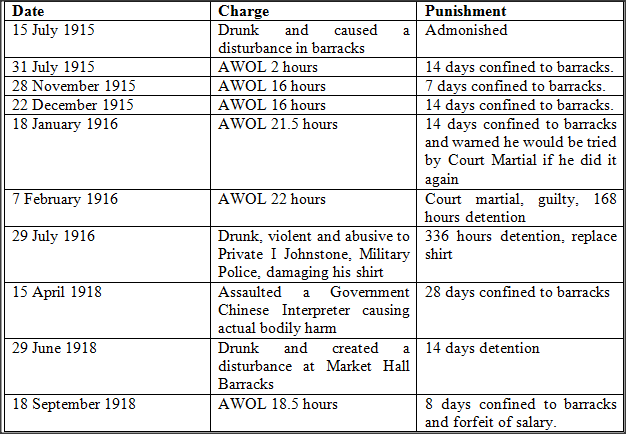 William is also recorded as having been sick enough to warrant hospitalisation three times during his time in Samoa - in July 1916 he was sick with enteritis, in January 1917 he was in hospital for seven days with mild dysentery, and in January 1918 he was sick with colic for 7 days. He was inoculated against typhoid in Samoa twice, in April 1915 and again in August of the same year.

After furlough in Auckland February-April 1917 William returned to Samoa on the Talune, arriving in Apia on 10 May 1917. He was then transferred from Radio Samoa Cyclist Section to Headquarters Staff as a Despatch Rider. He remained in that role for the next 11 months, until 19 April 1918 when he was transferred back to Infantry (Wireless) Detachment.

Having spent nearly three and a half years in Samoa on active service, without any involvement in fighting other than with fellow soldiers, the authorities or other colleagues, William was one of those unlucky enough to succumb to influenza at Apia Hospital on either 20 or 21 November 1918 (the date varies between recorded sources).  Pneumonic influenza, a highly infectious disease already responsible for hundreds of thousands of deaths around the world, had arrived in New Zealand during October and some quarantine measures had been imposed. Although the Talune had been quarantined in Fiji, no such restrictions were imposed in Samoa, and sick passengers were allowed to disembark.

The worldwide influenza epidemic, often referred to as the Spanish ‘flu, was introduced to Samoa on 7 November 1918 by the Talune (a New Zealand passenger and cargo ship which did a regular trading run round the Pacific)   which arrived with passengers who were already suffering from the ‘flu. The infection spread rapidly in Samoa, where there was little resistance amongst the native population and quarantine, infectious disease controls and medical facilities were limited. The death rate in Samoa rose frighteningly fast.

“The total number of deaths attributable to influenza was later estimated to have reached 8500, or 22% of the population. According to a 1947 United Nations report, it ranked as ‘one of the most disastrous epidemics recorded anywhere in the world during the present century, so far as the proportion of deaths to the population is concerned’.” ('Influenza in Samoa', URL: http://www.nzhistory.net.nz/culture/1918-influenza-pandemic/samoa, (Ministry for Culture and Heritage), updated 20-Dec-2012)

William was one of seven members of the Samoa Relief Force to die of influenza in Apia between 16 November and 18 December. They were all buried in a special plot in Magiagi Cemetery, joining three other servicemen who had died of accident or natural causes in the preceding months.

On 7 December a local newspaper Samoanische Zeitung reported that the epidemic was “practically over in the Apia district”. In the same report they said “In common with the rest of the community the Garrison suffered severely from the wave of epidemic disease”. They claimed 90% of the Garrison had been affected, but in most cases the attack was mild, but even so there had been six victims. (The seventh died two weeks later).   They then listed brief details of each of the six who had died, including William, of whom they said: “Pvte McKenzie was one of the best known among the rank and file of the Garrison. He came to Samoa with the original Relief Force in the early months of the War. Born in Auckland in 1869, he worked in that city and elsewhere in New Zealand as a bootmaker on his own account. His widow, Mrs A. McKenzie, resides in Devonport, Auckland. “

Annie, who was living at 58 Victoria Road, Devonport received a pension of £78 per annum from 1919 and his British War Medal and certificate in November 1921.  By 1923 she had moved to 42 Wairiki Road Mt Eden, Auckland and it was there she received William’s scroll.

William and Annie’s son Henry married Frances Jessie COOPER in 1922 and they and Annie were living together at 42 Wairiki Road, Mt Eden in 1928. Annie died in Auckland in 1945 aged 73 years.

In addition to including William’s name on the Brooklyn War Memorial someone in Auckland became very busy on William’s behalf after his death, ensuring his name was inscribed on the Roll of Honour granite tablet at Devonport Primary School, on the Devonport War Memorial in Victoria Road, Devonport (outside the Devonport Library), and on one of the panels in the  World War 1 Hall of Memories at Auckland War Memorial Museum.

One of the others in the Garrison force who died in the influenza epidemic and is buried in Magiagi Cemetery is Abraham Hadley, whose name is also inscribed on the Brooklyn memorial.