John Howard Jervis was born at Makara, on 28th May 1890. He was the son of Henry Jervis and Martha Prince.  Henry Jervis was a substantial farmer at Makara.  As detailed in his obituary in the Evening Post, 24th March 1939, Henry arrived in New Zealand from Shropshire, England, in 1886 and worked at Upland Farm, now Kelburn, for William Moxham, later managing William’s Makara Estate and then purchasing it himself.  Martha Prince was from North Staffordshire and followed Henry to New Zealand in 1887, where they married at Upland Farm in December and then moved to Makara. They had six children, 1 daughter and 5 sons; John Howard was the second child, and eldest son.

John started at Makara School at the end of January 1895. Harry Monaghan, another one of the seven men on the Makara memorial killed in WW1, was a contemporary at school, starting a year later but passing each standard at the same time from 1899 to 1904. Both left school within a few days of each other in June 1904, having attained standard VI.

According to a report from the unveiling of his memorial window in St Matthias' Church Makara in 1917, John distinguished himself in 1909 when he rode through a fierce storm over the bridle track from Terawhiti Station on the morning of 13th February, to report news of the wreck of the steamer ‘Penguin’.

John registered at Johnsonville for the compulsory military training required after the passing of the Defence Act in 1909 but the date of his training is not recorded in his service record. By 1914, over 100,000 boys and young men had taken part in this training.

John was working as a shepherd in the Wairarapa for G Tyer (probably Alfred George Tyer), a farmer at Morrisons Bush, Greytown when war broke out on 5th August 1914. John wasted no time in enlisting for the Expeditionary Force at Palmerston North on 13th August. The description of him on his medical history form records his height as 5 foot 7 & 3/4 inches, weight 161 pounds, with a chest measurement of 33 ½ inches. He had a fair complexion, light blue eyes and light brown hair, but his teeth were in poor condition.  A picture of him taken in uniform is reproduced below – this picture can be found at St Matthias' Church, Makara. 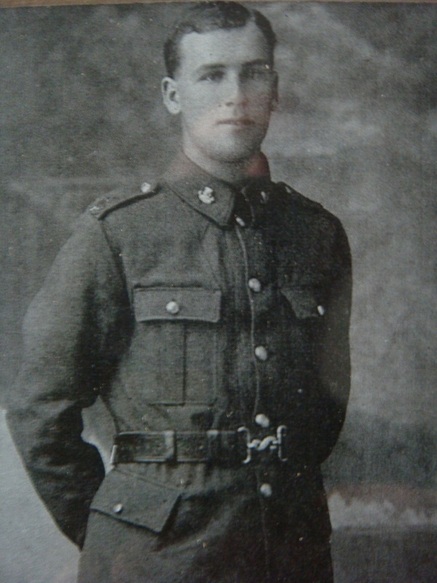 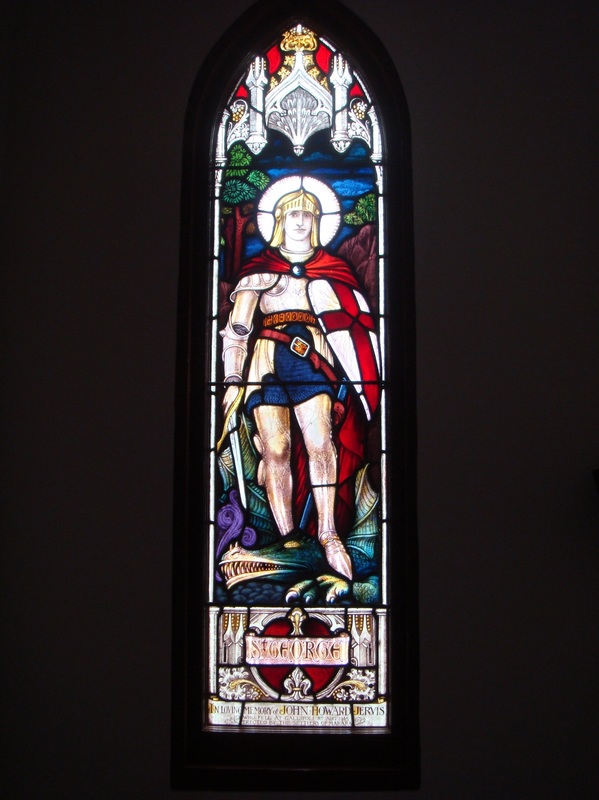 John stated on enlistment that he was already a member of the 6th Manawatu Mounted Rifles. This regiment had been formed in March 1911 as part of the new part-time Territorial Force organisation, which with a small regular force of professional soldiers, was the basis of the army at the outbreak of war. One of the regional camps to prepare men for the Expeditionary Force had been set up at the Awapuni Racecourse in Palmerston North, and it was here that John was initially posted for training as a trooper, the 6th Manwatu Mounted Rifles squadron becoming a unit under the Wellington Mounted Rifles Regiment.

John underwent training with his mates at Awapuni camp until the regiment left for Wellington by train on Tuesday, 22nd September.  They arrived the next day and boarded transport ships – John along with most of the 6th squadron was assigned to the HMNZT Tahiti; however departure was postponed and they returned to port on the 28th September. Training resumed at Trentham Racecourse Camp until Thursday 15th October, when the troops started to re-embark, and they left the next morning, setting sail at 6am.

There was a brief stopover at Hobart, Tasmania on the night of 21st October, and the men had a short break on shore the next morning, marching through the town, before re-embarking at midday and leaving port at 4pm.  On the 28th October, the convoy arrived at Albany, Western Australia, joining the main body of the Australian Imperial Force, and they departed on 1st November.

On 15th November the convoy arrived at Colombo, Ceylon – now Sri Lanka – and the men were given shore leave in groups. John probably did not get to enjoy any shore leave, as his medical records state he was in hospital between 16th November and 3rd December with lobar pneumonia (a form of pneumonia that affects a large and continuous area of the lobe of a lung).  He was initially diagnosed with influenza, but this was crossed out in his medical record. He spent 19 days convalescent in hospital on board the Tahiti.

The convoy left Colombo on the 17th November and arrived at the port of Suez, Eqypt on 30th November. The journey through the Suez Canal was uneventful and they arrived at Alexandria, Egypt on 3rd December.  Only 14 horses out of 728 carried died during the journey.

The Wellington Mounted Regiment (WMR) disembarked on 4th December and travelled by train to a racecourse near Zeitoun, Cairo, but the ground was found to be infested with ringworm so the men and horses moved the following day to an open desert area nearby.  This became Zeitoun Camp.  A routine was soon established at camp including training, sports activities, concerts and sightseeing.

The men remained training at Zeitoun Camp until Saturday 8th May 1915, when they departed for Alexandria, to reinforce the ANZAC force at Gallipoli.  They left their horses behind, as the terrain at Anzac Cove and on the peninsula was not suitable for horses, so they were to fight as standard infantry units. John embarked on the HMT Grantully Castle, which departed from Alexandria at 6pm on 9th May, and arrived at Anzac Cove at 12:30pm on the 12th May.  They landed after dark and bivouacked in Reserve Gully.  There were 25 officers and 451 other ranks in the regiment at this point.

On the 13th May, the reinforcements were ordered to relieve the Royal Naval Brigade and the WMR scaled Walker’s Ridge in the hot sun, getting into position by 3pm. The headquarters established by Brigadier-General Russell were on the highest point of this ridge, which became known as “Russell’s Top”.  The men had a very small area in which to establish themselves, and they were close to the Turkish lines, as well as to a cliff at the rear.  The trenches were foul and flies were everywhere, and Turkish snipers active.

The main activities of the regiment over the next few days were to widen and improve the trenches to allow better flow of men and machinery up and down the ridge. They achieved this despite water shortages, a constant rain of bullets from the Turkish lines opposite Russell’s Top, and the stench from decomposing bodies nearby.

By the middle of May, the Turks had brought up reinforcements, and the official WMR war history mentioned that their guns were particularly active on Monday 17th May, with their aeroplanes overflying the ANZAC positions. “Two guns of the N.Z. Field Artillery were hauled up Russell's Top and placed in position; the digging of a sap to connect Walker's Ridge and Pope's Post was hastened, and the supports were brought forward to sleep in the trenches.”

John was wounded on 17th May, so it was likely during the above activity. He was evacuated to the British Naval hospital in Mtarfa, Malta (recorded as Imtarfa on his record). There is a question mark beside the entry, as if the writer was not certain; however the next entry in his service record shows that he was admitted to the hospital on Malta with measles on 24th May, via the Hospital Ship Soudan.

In the meantime, a truce on 24th June enabled both sides to bury their dead. On 28th June, the 6th Manawatu Squadron saw significant action, consolidating a newly captured position – named No. 3 Post – and holding it until relieved on the 29th June. On 30th June the strength of the WMR was 24 officers and 327 other ranks.

On 1st July, reinforcements arrived to strengthen the regiment, adding 4 officers and 97 other men. John returned on 8th July and on the night of 17th July the WMR held a concert on Wellington Ridge, despite the shelling. The weather was hot and evenings were fine allowing time to bathe in the sea at night. On the 31st July, the Regiment was relieved from the trenches by the 10th Australian Light Horse Regiment, and the WMR bivouacked on the southern slopes of Walker’s Ridge.

The Battle of Chunuk Bair took place from 5th August to the 9th August, and it was on the 9th of August that John was killed.  Initially he was reported as wounded but a board of inquiry at Zeitoun in January 1916 established that he had in fact been killed that day, and the whereabouts of his body was unknown. He is one of the many men who fell with no known grave, and whose remains sometimes become visible through erosion to this day.

John was one of 117 killed or wounded in the 24 hours that the WMR held their position at Chunuk Bair.  It is not known at what point he fell, but the Turks resumed their attack on the position at 4am on the 9th August, and there were heavy assaults for the next 10 hours. Some Allied naval gunfire also fell on the New Zealand and British trenches.  The barrage ceased after 2pm, and the remaining men of the WMR were relieved at 10:30pm.

John was 25 when he was killed, unmarried with no children, but with parents, brothers, a sister and many friends who commemorated his life with the stained glass window that is still at St Matthias' Church, Makara.  The window incorrectly records his date of death as 8 August.

John was entitled to the 1914-15 Star, the British War and the Victory medals and these were sent to his father at Makara in 1924.
﻿
Research undertaken by Kaye Batchelor.
﻿

Official War History of the Wellington Mounted Rifles Regiment 1914-1919 by A. H Wilkie, Whitcombe and Tombs Limited, 1924, Auckland. Available on line as a pdf document.