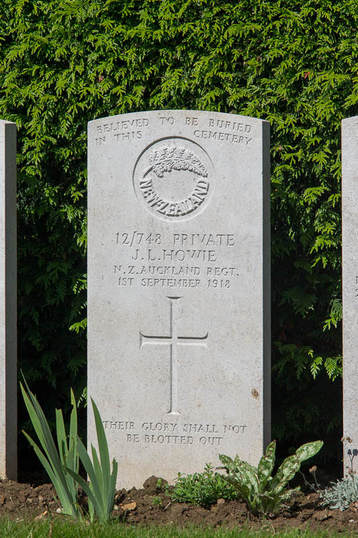 James Leslie Howard, known as Leslie, was born in Wellington on 28 May 1893, the eldest child and only son of James and Ana (nee White) HOWIE who had married in Rangiora in 1889. James senior was a carpenter and he and Ana lived in Ohiro Road, Brooklyn, for many years from before Leslie was born. Leslie had three sisters, Alice Irene born 6 March 1895, Ana Elvira known as Vera born 20 March 1898 and Erica Bransby born 28 November 1906.

Leslie and his family were living in Ohiro Road, Brooklyn when he attended Vogeltown School and Brooklyn School from October 1898 until December 1905. In June 1904, Leslie passed the Trinity College of Music preparatory theoretical examination, his teacher being Miss Ada Fitchett who lived nearby in Ohiro Road. The Fitchett family was one of the early settler families in Brooklyn where they established in the 1850’s a 100-acre dairy farm called Ohiro Farm, known also as Fitchett's Farm. The Fitchett family farm was one of the main suppliers of milk and dairy products for Wellington in the mid-1800s.

In January 1906, Leslie transferred to Thorndon School, where he remained until 7 June 1907, leaving when he won a free place scholarship to attend Wellington College for a year, having passed the Junior National Scholarship with a mark of 461 in December 1906.

It is not known what Leslie did after he left Wellington College, but by 12 August 1914 when he enlisted at Hamilton he had moved to Gordonton in the Waikato (north of Hamilton) where he was living with a Mrs Cain. His occupation was as a farm labourer with Harvie & Matthews.

Leslie’s declared age on enlistment was 21, his height 5 feet 8 inches, weight 149 pounds; chest measurement 33¼ inches minimum and 36½ inches maximum; he had fair complexion, blue eyes and fair hair and a scar on the back of his right middle finger. His religious profession was Presbyterian. His medical examination showed his sight to be 6/6; hearing in both ears 48”; colour vision normal, his limbs, chest, heart and lungs were normal; he was free from hernia, varicocele, varicose veins, haemorrhoids, inveterate or contagious skin disease and he had a distinct mark of vaccination. Overall, he was in good physical and mental health, apart from his teeth being in poor condition. He was single and gave as his next of kin as his father at the Ohiro Road, Brooklyn address.

Leslie was given the regimental number 12/748 in ‘B’ Company of the 16th Waikato Infantry.

On 16th August, Leslie, together with 53 other men from the Waikato Regiment, travelled by train to Auckland where he was attached to the Auckland Regiment and left for Suez with the Main Body of 8,454 troops on the ‘Waimana’, one of the 10 ships to leave Auckland on 16 October 1914. They arrived in Egypt on 3 December and established a camp at Zeitoun, near Cairo. Leslie may have been in combat for the first time when the regiment helped to defend the Suez Canal from an attack by the Turkish troops on 3rd February 1915.

On 12 April 1915 Leslie embarked from Alexandria for the Dardanelles and took part in the landings at Gallipoli. On 10 June 1915 he was admitted to No.15 Stationary Hospital at Mudros on the Greek island of Lemnos with measles, where he stayed until 28 June by which time he had recovered sufficiently to rejoin his unit in Gallipoli. Only two weeks later Leslie was once again considered too sick to remain at Gallipoli, as he was suffering from debility and bad teeth, and on 15 July was taken on the hospital ship ‘Soudan’ to Alexandria where he was admitted to the No.17 General Hospital, remaining until he was discharged on 31 July 1915. After his discharge from hospital he spent 9 months employed as a storeman at the New Zealand Base Depot in Ghezereh, Egypt.

While at Ghezereh, he and his fellow soldiers received a khaki handkerchief and packet of cigarettes for Christmas 1915 from money raised by girls at Brooklyn School. Leslie, as an ‘old boy’ of the school, wrote to the headmaster, Mr J B Hopkirk, saying: “We are all very grateful indeed to the children of Brooklyn School, and we all recognise what a lot of little pleasures the children have denied themselves in order to raise the money. There is nothing that helps the soldiers more in this great struggle than the knowledge that we are continually being thought of by the people of dear old New Zealand. My comrades and I all join most heartily in thanking you for your kindness.” (Evening Post 18 February 1916)

On 21 September 1916, Leslie was wounded in his left shoulder while fighting on the Somme. His wound was sufficiently serious that after being admitted to the No.11 General Hospital at Camars until the 28th he was evacuated to England on the H.S. ‘Stad Antwerpen’. and admitted to the 2nd London General Hospital at Chelsea where he was to remain until 13 October 1916. Leslie then convalesced at the New Zealand Convalescent Hospital at Walton on Thames until 7 November 1916. He was able to go on furlough for a week from 10 November 1916 and then reported at the Base Depot in Codford, Wiltshire.

It was probably at one of the hospitals that Leslie met his wife to be, Margaret Kirkland Robertson, who was a clerk. They were married at Bath Hotel, Glasgow, by Rev. Dr Andrew Laidlaw of St Georges in the Fields Parish on 8 January 1917. Leslie was 23 and his wife 10 years older. Leslie gave his address as Codford, Wiltshire and Margaret as 166 West Graham Street, Glasgow.

After his marriage in Scotland, Leslie returned to the Base Depot at Codford where he remained for 10 months. During this time he began a series of being absent without leave offences, receiving punishments ranging from forfeiting 3 days’ pay to 42 days detention.

Finally, on 26 October 1917, having spent one year in England, Leslie proceeded once again to France, this time with the 4th Reserve Battalion Auckland Regiment and was attached to strength at the Base Depot at Etaples. It was decided on 27 October that as he had embarked for overseas, the 37 days unexpired portion of detention awarded on 22 October 1917 be remitted. He then joined the 1st Battalion Auckland Regiment in the field for a short time, before joining the 2nd Battalion on 24 November 1917.

Leslie was also evacuated in and out of No.3 New Zealand Field Ambulance with scabies three times between 20 April 1918 and 25 August.  When he recovered on 31 August he rejoined the 2nd Reserve Auckland Battalion.

In amongst all these sentences, punishments and sicknesses it is difficult to ascertain the extent of Leslie’s involvement in actual fighting. The Auckland Battalion had by the end of August 1918 for some weeks been involved in the push to capture Bapaume and it’s environs, and was engaged on the line Frenricourt-Bancourt-Riencoutt when, on 1st September 1918, one day after rejoining, Leslie was killed in action. He was 25 years old.

Leslie’s remains could not be positively identified in the heat of battle or thereafter, and he is recorded on one of the Special Memorials in Bancourt British Cemetery, 4 kms from Bapaume, He is named on Special Memorial C. 15 in Row B. The Memorial is a cross with the words ‘Their Glory Shall Not Be Blotted Out’ inscribed upon it (refer photo above). At the top of the headstone is also the inscription: Believed to be Buried in this Cemetery.

Leslie’s death is commemorated on the WW1 memorial in Gordonton, Waikato, as well as the one in Brooklyn, Wellington.

Very promptly after his death the following obituary appeared in the Evening Post:

19 September 1918
Private James Leslie Howie, reported killed in action in France on August 31 (sic), was the only son of Mr James Howie, of Ohiro Road. He was a native of Wellington and received his education at the Brooklyn School and Wellington College. At the time of his enlistment he was engaged in farming pursuits in the Waikato. He left with the Main Body, was at the landing at Gallipoli, and afterwards served in France, where he was wounded at the battle of the Somme. Private Howie was invalided to England and after recovery proceded (sic) again to France, where he remained until the end came. The school flag at Brooklyn on Wednesday was hoisted out of respect to the memory of the deceased soldier and old scholar.

The only other public acknowledgement of Leslie’s death was published in the Waikato Times, on 1 September 1920:
HOWIE – In fond remembrance of James Leslie Howie (16th Waikato Regiment, Main Body) only son of James and Ana Howie, of Wellington, killed in action in France on September 1st 1918. Inserted by his loving sister A.I. Howie.

James’s sister Alice Irene was at the time the Secretary of the Waikato Sub-Provincial District of the New Zealand Farmers Union (Hamilton), which suggests there was some Howie family connection to the Waikato and thus James being resident in Gordonton in 1914.

In his Will dated 6 April 1918, Leslie’s wife, Margaret was the only beneficiary. Leslie’s plaque and scroll were sent to his wife who was still at 166 West Graham Street, Glasgow, Scotland in July 1921. She received his 1914-1916 Star, British War medal and Victory medal in January 1922 at the same address.

Leslie’s father died in 1926 aged 59 and he was buried in what is still an unmarked plot in Karori Cemetery. His mother died 11 December 1951 aged 84 and was cremated at Karori Cemetery, Wellington.