Jack Dick SHADDICK was only 21 years old when he died fighting on the Somme in 1916. He hadn’t lived long enough to have made his mark on the world, and vital records about him are scarce.  His origins are a mystery as there is no record of his birth, and his birthdate differs in various sources. A couple of possibilities as to his birth and parentage are canvassed in his story.

Jack may have been born in Wellington on 26 April 1895 (which is the date he claimed when signing attestation papers in 1915), as the eldest son of William and Annie Constant/Constance (nee McCleary) SHADDICK who had married on 28 November 1894. Annie had already had a child before she married – a daughter Leah Daisy, born in 1892 and registered as Leah Daisy McCleary. It is not known who Leah’s father was. According to the above birth date Jack was born only 5 months after his parent’s marriage, but there is no registration for him on the online database of New Zealand Birth Death and Marriage records. In September 1895 there is a registration for William and Constance’s daughter, Rita Mona Madge. Jack would have been only five months old when she was born if he was born in April of the same year,  and if so Annie could not have been not Jack’s mother.  This would suggest that Jack was not the natural child of William and Constance.

However, school records state Jack was born on 17 June 1896. If this date is correct, Jack would have been born a mere nine months after his sister Rita. Such a short time between births is not common but it is possible, and a later birth date for Jack seems more plausible. However, it is odd that his birth was not registered as the other children’s births were.

It needs to be noted that birthdates on attestation papers for service in WW1 were frequently incorrect, and younger men often added a year to their actual birthdate to ensure their acceptance into the armed services. If Jack had been born in 1896 he would only have been 19 years old when he signed up, so he would have been likely to add a year or so to his birth date. 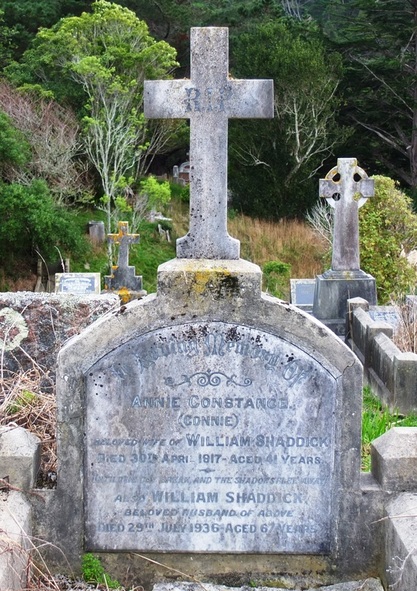 Annie and William Shaddick's grave, Karori Cemetery, Wellington
Unless a birth registration/certificate turns up one day, this aspect of his existence will remain a puzzle.

In 1898 William and Constance completed their family when they had a son, Leo Lowrie Patrick. In the City of Wellington register of voters for the city of Wellington in 1896 there is a William Shaddick living in Leeds Street with Annie Shaddick. His occupation is bootmaker, and Annie’s is “domestic duties”. William seems to have worked for the Southern Boot Company in the early 1890’s, for whom he played cricket, but he joined the staff of Hannah’s Boot Factory and was working for them when Jack signed up, and his employment is referred to in his death notice in 1936. Hannah’s factory was located in Leeds Street. During the early 1900s it was estimated more than 250 people worked for the firm.

Also in 1896 William Shaddick, bootmaker, is registered in the Wellington suburbs electoral roll living in Brooklyn, with his wife Constance. By 1911 the family were living at 10 Hayes Street[1], and seem to have been close neighbours to the Sinclair family who lived at no. 9. Connie applied for work as a charwoman at Parliament Buildings in 1904, so would have been contributing to the household income from then on.

Jack attended the Marist Brothers School in Boulcott Street up to June 1908 and then went to Brooklyn School, leaving on 17 June 1910 having attained the Fourth Educational Standard.

At the time of his attestation he was working as a coppersmith for plumbers Jenkins & Mack. He first enrolled at the Wellington Recruiting Office on 8 June 1915. He later enlisted at Trentham on 23 August 1915 stating that he had been a Signaller in the New Zealand Field Engineers in Wellington for 3½ years. He was 5’5¾” tall, weighed 108.6 pounds, with fair complexion, brown eyes and hair. His religion was Roman Catholic. At his medical examination he was found to have no fits or illnesses, with normal hearing and colour vision and the condition of his teeth was ‘sufficient’. He agreed to be inoculated against typhoid and this was carried out in October 1915.

Jack was given the regimental number 11/1965 in the 8th Squadron 8th Reinforcements of the New Zealand Field Artillery. He went to Tauherenikau Camp for training and there he contracted measles and was on sick leave from 6 to 9 November 1915. Jack embarked as one of the 9th Reinforcements for the NZEF on HNZMT on the Maunganui on 8 January 1916, and arrived in Suez on 8 February 1916. He was transferred from the Wellington Regiment and posted to 8th Battery NZ Field Artillery at Moascar on 15 March 1916. He was training in Egypt until 6 April when he embarked for France. Jack served in the field with the Artillery, as part of the NZ Division which went into battle on the Somme on 15 September in the area of Flers and Longueval. First into action was the New Zealand Field Artillery. Because of setbacks along the front, the anticipated breakthrough was not achieved on 15 September or subsequently while the New Zealand gunners remained on the Somme. “On 3–4 October the Division withdrew from the muddy horrors of the Somme. It had lost in 23 days some 7,000 men, 1,560 of them killed. The gunners stayed behind, as usual, and endured three more weeks of toil and danger in worsening conditions, a nightmare of flooded gunpits in a shell-torn swamp.”[2] By the time the artillery withdrew the gunners had fired half a million shells at the Germans.

Unfortunately one of those who didn’t withdraw was Jack, killed in action on the 15th October, after months of hard fighting in appalling conditions.

Jack was entitled to the British War and Victory medals and the Memorial Plaque and Scroll, all of which were sent to his father William, still living at 10 Hayes Street in Brooklyn, in 1921. Jack’s mother had died on 30 April 1917 aged 41 and was buried in the Roman Catholic section of Karori Cemetery, being joined by William in 1936.

Jack’s brother Leo was called up for military service in April, 1918 but he did not serve.

Evening Post 16 October 1919:
SHADDICK – In loving memory of our dear son and brother, Signaller Jack Shaddick killed in action on the Somme on the 15th October 1916.
One of the Best.

Evening Post 16 October 1922
SHADDICK – In fond and loving memory of Signaller Jack Shaddick, killed in the Battle of the Somme, 15 October 1916. To remember ever dear. Inserted by his father, sisters and brother.

Note:
There is no Jack Dick Shaddick (or any name like it) registered for the years 1895 or 1896  according to the microfiche records at the National Library, Wellington. His brother and sisters’ births were registered.

The Catholic Archives office and St Mary’s Church archivist have been contacted for baptismal or school records for a date of birth, but neither had any records for Jack.


[1] Hayes Street is now part of  McKinley Crescent. The other part was called Adams Street. Many streets in Brooklyn were named after Presidents of the USA – Washington, Jefferson, Lincoln, Taft, etc. which was deemed to be appropriate in an area called Brooklyn.
[2] http://www.teara.govt.nz/en/1966/wars-first-world-war-1914-18/page-5 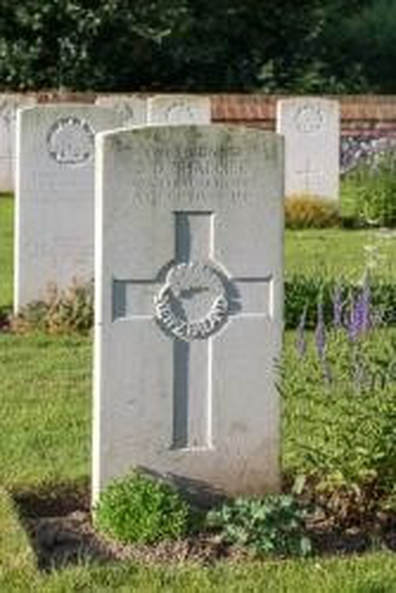