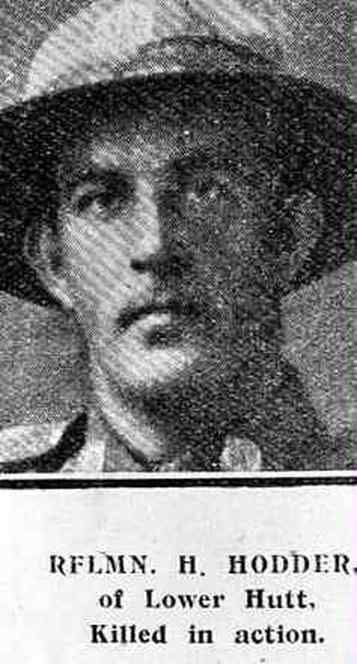 Herbert Hodder was the only son of John Thomas and Nellie HODDER. At the time of his birth on 8 September 1890 the family were living in Sydney Street, Caversham, Dunedin, on the northern slopes above where the Southern Motorway now runs and about 2.5 kms from the port. Thomas was a boatbuilder, a trade he followed until the 1920’s. Herbert had an older sister – Ethel Kate, born 1887. After Herbert’s birth the family moved north to Wellington, and set up home in Lorne Street on the Te Aro flats just off Cambridge Terrace. It was here that Nellie died aged 32 on 5 March 1892. She was the 35th person to be buried in the newly opened Karori Cemetery. Thomas had a boatbulding shed on the waterfront at Clyde Quay and built yachts and other boats.

In October 1893 Thomas married again.  His new wife was Lily Bott, and they had a daughter Clarice Lilian in 1894.

When Herbert enlisted on 11 January 1916 he gave his occupation as “gardener”, at Taita. Whether this meant he was a market gardener, or tended the gardens of properties in Taita is not known. His medical examination, which had been conducted a few months earlier, stated that he was 5 ft. 5 1/2 inches tall, weighed 138lbs., and had blue eyes, and brown hair. The examining doctor could find no physical flaws, and noted “a fine stamp of man” on the record. It was also noted that he had tattoos on both his forearms. His professed religion was Anglican.

On enlistment Herbert was posted to the New Zealand Rifle Brigade as a Rifleman, and assigned regimental number 26/1618. After a mere 3 months training Herbert was dispatched to Egypt as one of the 2nd Reinforcements, 4th Battalion “H” Company which left New Zealand on 1 April 1916. More than two thousand men left on the Maunganui and Tahiti, and arrived at Suez on 2nd and 3rd May.  After only a couple of weeks in Egypt Herbert was on his way to the Western Front and the horrors of the front line on the Somme. He lasted less than a month until succumbing to influenza severe enough for him to be admitted to the General Hospital at Etaples on 16 June, from where 10 days later on 26 June he was transferred to the No. 1 Convalescent Hospital.

On 9 August 1916 Herbert was posted to “D” Company, and was back in action on the front line. Just over four weeks later he was dead – killed in action on 12 September, somewhere to the south of Hebuterne and Rossignol Wood. Herbert was initially buried in an unrecorded location, presumably close to where he was killed. In the spring of 1917, the battlefields of the Somme and Ancre were cleared by V Corps and a number of new cemeteries were made, three of which are now named from the Serre Road. Serre Road Cemetery No.2 was begun in May 1917 and by the end of the war it contained approximately 475 graves, one of which is that of Herbert Hodder. Herbert was one of four NZ soldiers killed in 12 September 1916 who were exhumed and reburied in Serre Road Cemetery No. 2, their identification relying on collar badges, their boots, or their uniform.  One of them is "unknown". The four were interred in Plot 17. Row D, in graves 5-8, under a collective cross.

Herbert’s service entitled him to the British War Medal, and the Victory Medal, both of which were sent to his father who was living in Taita in the immediate post-war years.  At some time he and Lily moved to Auckland, taking up residence in Blockhouse Bay Road. Thomas died in 1939.

Notices were placed in the In Memoriam column of the Evening Post from 1917-1920, by Herbert’s parents, and his sister Ethel who had married Alfred Telbury in 1910. Initially there was also a loving notice from someone signed only as W.M.S. 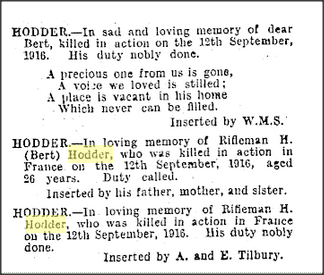 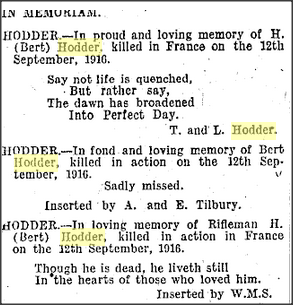 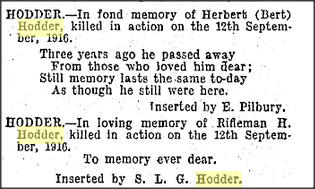 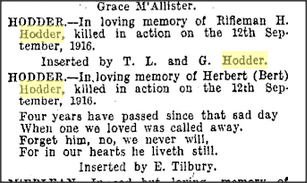 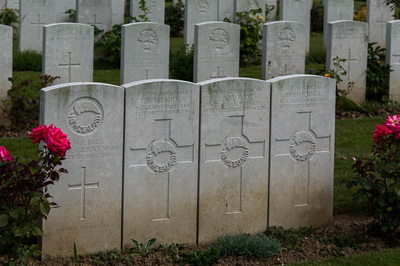 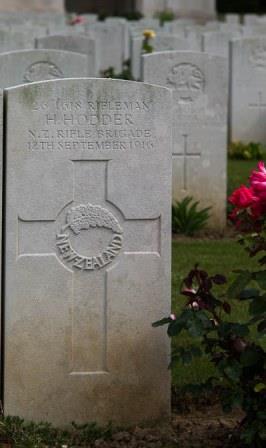