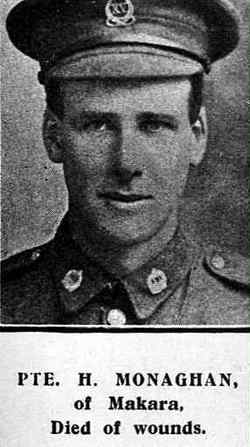 Harry Monaghan
(listed as H Monaghan on the Makara Memorial) 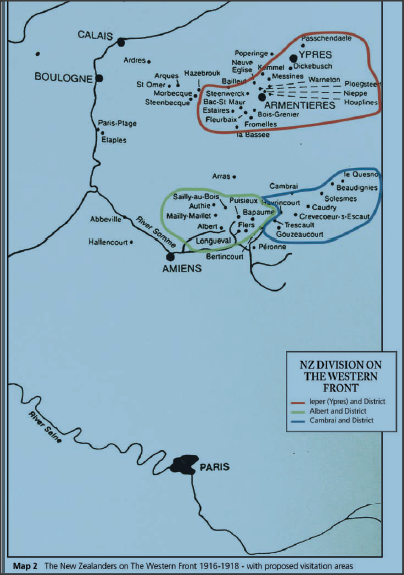 Harry Monaghan was born at Makara, on 7th August 1890. His parents were Henry James Monaghan and Sarah May Trotter, who married in 1875 and had a family of 3 sons and 4 daughters. Henry, aged 38, was struck on the head by a falling rock in February 1890 and died 6 weeks later on 28th March, at the family home in Makara.Harry was born six months after his father’s death.

Henry James Monaghan was a farmer at Makara, born in Wellington in 1852, the fifth of eleven children, to Irish-born Patrick Monaghan and Mary O’Connell.

His wife, Sarah Trotter, was the daughter of Peter Trotter and Mary Burnett and was born in Wellington in 1853, and died in 1947 aged 94. She was the third child in a family of around 9 (not all siblings have been confirmed). Peter Trotter arrived in New Zealand in the 1840s and married Mary Burnett in 1848. Peter died in October 1899, his obituary recording that he was of a retiring disposition, not involved in public life other than as Chairman of the local school committee for 20 years! As the obituary records that he was one of the people who was caught up in the Hutt Valley hostilities between settlers and local Maori in 1846, it is no wonder he later led a quiet life. Patrick and Mary are commemorated in a stained glass window in the Makara Catholic Church of St Patrick.

After Henry’s death Sarah never re-married, but as both she and Henry came from large families, no doubt the wider family stepped in to assist her with raising her young family. Harry started school at Makara in 1896 and left school in June 1904, having attained standard VI. He was a year younger than John Jervis, also commemorated on the Makara War memorial, but passed each standard from 1899 to 1904 at the same time so it is likely they were friendly.

Harry is recorded in the NZ Electoral rolls as living at Makara in 1911 and 1914, his occupation both times being farmer, and on enlistment he stated he was self-employed. He enlisted on Tuesday 18th April 1916. According to his medical records, he had a fair complexion with blue eyes and light brown hair, very fit with no defects and 5ft 10 ½ inches, 144 pounds in weight with a chest measurement of 34 inches. His religion was Roman Catholic.

Harry’s military personnel file outlining his service in WW1 contains very little information, but it does record that he was posted to J Company of the Wellington Infantry. He would have been billeted at Trentham Military camp for his basic training for around five weeks, then moved by rail to Featherston camp, which had been established in January 1916. At Featherston the men underwent further infantry training for eight weeks, after which they marched over the Rimutaka Road back to Trentham for the final training and equipping prior to leaving for overseas. Harry was to leave Wellington on 29th July, as a member of the 15th Reinforcements on the Ulimaroa, bound for Devonport, the naval base at Plymouth, England.

It was normal for the departing soldiers to have a parade through Wellington, though much of the spectacle of the previous year (formal receptions and speeches) had been dispensed with by mid-1916. The 15th Reinforcements were split into two and the first wave was farewelled with a parade on 25th July, while the second wave, including Harry’s “J” Company, paraded through the central city on 29th July, the day of departure. The weather was beautiful and there was a large turn out to watch the men parade through the streets, with bunting and bands providing added enjoyment.

As a single man, two of Harry’s family would have been able to farewell him at the wharf (married men were allowed three family members). However, the farewell may have been rushed. In the “Ulima-roarer”, a magazine created by the men on the Ulimaroa, an account of the trip mentions a hurried departure. “Incidentally, we did not bargain to be pushed off quite so promptly. An hour or two in Wellington would have been golden hours to many of us. Many a sweetheart had a parcel made up, thinking that general leave was quite “on the cards”, but no, the right wing had gone and duty called.” One of the troops, Private Arthur Robert Quedley, wrote in his diary: “We left Wellington on Saturday July 29th, 1916, on the troopship Ulimaroa at 9.30pm. On Sunday I saw my last sight of New Zealand."

The Ulimaroa had been the subject of speculation after her previous voyage in May 1916, when a steward committed suicide, and there were reports of poor quality food causing unrest. However, Harry’s voyage appears to have been uneventful, aside from poor weather for the first 10 days of the trip. Their first stop was at Albany, Western Australia, where they received great hospitality from the locals.

Life on board ship was regimented, but with free time most afternoons. The men attended lectures and received training on board, but also sports and activities such as tug of war, quoits, boxing, wrestling and pillow fights were organised. There were books, magazines, the Regimental Band and even a gramophone and some records, the latter being a desired item to purchase at the ports of call.

The Ulimaroa docked at Devonport on Thursday, 28 September 1916.The men journeyed to Sling camp on the Salisbury plain, a training camp for New Zealand servicemen.

Harry’s record states that he was posted overseas from Sling on 10th October 1916 – his stay at Sling had lasted a mere 12 days. He was in the 1st Wellington Company and he arrived at the NZ Infantry and General Base Depot (NZIGBD) at Etaples, France, on 11th October. On 23rd October, Harry was posted to the 2nd Battalion Wellington Infantry, 7th Company. And that is the last entry in Harry’s record until his death from wounds “in the field, France” nine months later, on 1st August 1917. He is not recorded as suffering from any illness or any transfer of unit, so the presumption is that he remained fit andwell with his unit. The following provides an overview of the main activities of the 2nd Battalion between October 1916 and 1st August 1917.

Between October 1916 and February 1917, the New Zealand Division was based in the Sailly-sur-Lys sector, then in the trenches around Ploegsteert and Le Tourquet. From March to June they were based in the Messines sector, the battle of Messines taking place from 7-9 June. From late June to August, the Division were concentrated around the Warneton-Lys sector and at La Basse Ville.  The map on the left shows the main locations on the Western Front where New Zealanders were posted between 1916 and 1918.

The Battle of the Somme had taken place in September 1916. By November 1916 incidents were tailing off and the weather was deteriorating. The 2nd Battalion was relieved from Armentieres and proceeded to Sailly-sur-Lys, where the men were engaged in training and trench maintenance. The pattern of the next few months was broadly similar, with time on the front line interspersed with time in reserve. Being relieved usually meant a march of some miles to a billet position, then strenuous working parties carrying out maintenance on existing trenches and sometimes the digging of new ones. When time allowed or a particular action was planned, the men underwent training, and occasional games of rugby and football were played for recreation.

On 31st March 1917, the 2nd Battalion moved into Ploegsteert Wood and on 4th April to La Douve sector opposite Messines. The objective was to eventually take Messines, but it required no little preparation and training. The Battalions were to have a break from trench life at the end of April, but it was cancelled and they remained on the line. Finally on 4th May, 2nd Battalion was relieved and marched to Aldershot Camp, south of Neuve Eglise, where the men were able to have baths and work in daylight, as this area was not under enemy observation.

On the 10th of May the 2nd Battalion marched to Petit Sec Bois where they remained until 19th May. Both Battalions then proceeded to the area around Bailleul for 12 days of brigade training for the attack on Messines. They left on 31st May and arrived in De Seule on 2 June, where they dug in. For much of the action around the capture of Messines, the 2nd Battalion was in reserve but while they were in the line, they came under active bombardment with gas. The weather was scorching hot at this time, adding to the discomfort. On 9th June both Battalions were relieved. Between the 6th and 10th of June, the combined loss of the Wellington Battalions was 88 killed, 15 missing and 464 wounded.

On the 18th of June, the 2nd Battalion went into the line opposite La Basse Ville. John H Gray in his book “From the Uttermost Ends of the Earth”, page 107, states that the action at La Basse Ville was a feint, to divert German attention from preparations for a third Ypres battle. The NZ Division was to seize La Basse Ville as part of this strategy. It was this action that was to cost Harry his life.

The map below shows the area around La Basse Ville and the location of the front line. 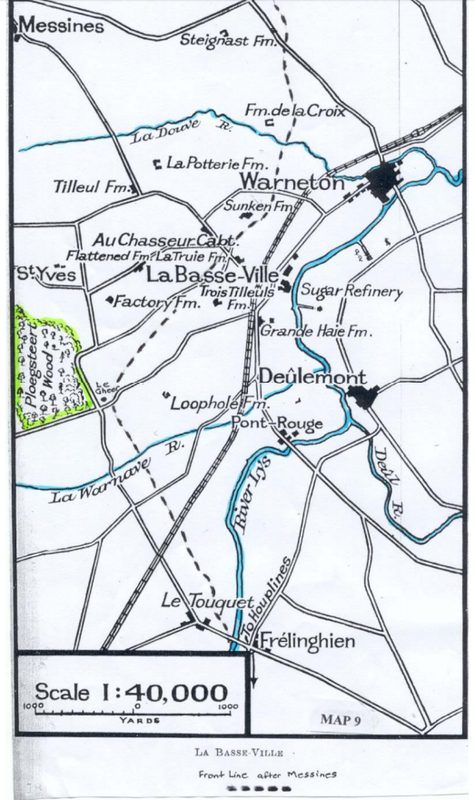 The Battalion came under mustard gas attack and constant bombardment on the slopes of Hill 63, where they had their dugouts. They could even see planes overhead in the early morning in fierce duels. The weather continued hot and the wooded area was full of green foliage. The Battalion was spelled for a time to St Marie Capelle and returned to La Basse Ville on 19th July.

The Hawkes Bay Company took the village on 27th July, but the Germans counter-attacked and drove them out. On the 31st July the village was again seized and held against the counter-attacks. Part of the 2nd Battalion seized the sugar refinery, while others cleared the hedgerows. The Germans countered with intense shelling on the new front line, but were unable to take the village back. On the night of 31 July, 2nd Battalion was relieved and they went to camp at Kortepyp, with all the wounded evacuated before withdrawing. There were no further counter-attacks on 1st August.

How then did Harry come to die of wounds on 1st August 1917? His record says he received multiple gunshot wounds to his legs. He was picked up by the 3rd Field Ambulance and then admitted to the #2 Australian Casualty Clearing Station, where he died. No time of wounding or death is given in his records, so perhaps he was a casualty of the last bombardment by the Germans on 31st July, or was unlucky to appear in the sights of a sniper on 1st August.

Harry was buried in the Trois Arbres Cemetery, Steenwerck, Nord, France in Plot 1, Row  X, No. 22, five rows from John Teaze (Brooklyn Memorial) who had been buried only five weeks earlier.

He received posthumously the British War Medal and the Victory Medal. His mother Sarah was his next of kin and the executor of his will was Sydney Phillip Gillespie, who had married his sister Mary Elizabeth in 1912. Harry was not married and did not leave any known children, dying at the age of 26, just days before his 27th birthday. His mother lived to the grand age of 94, and in 1947 was interred in a family grave at Karori Cemetery. A commemorative plaque for Harry had been inserted on the grave at some time after his death. 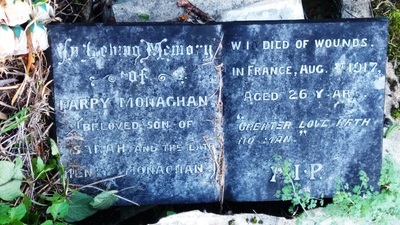 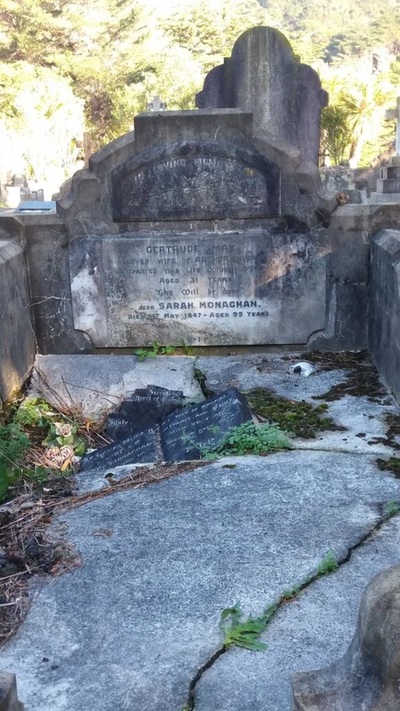