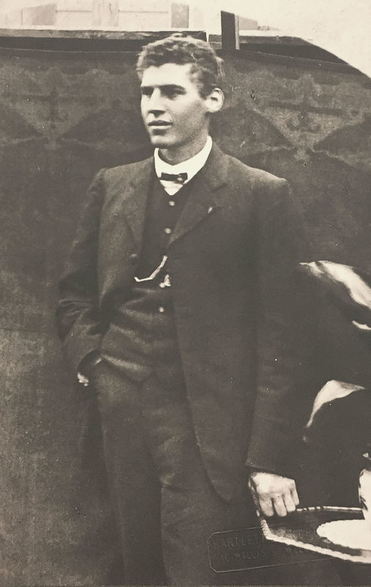 Frederick Andrew BRILL was the third son (and eighth child) of Thorwald and Wilhelmina Brill.  He was born in Tarawera on 6th May 1884, and a birth notice appeared in the Hawke’s Bay Herald four days later.

Thorwald had married Wilhelmina Barbartina ESPERSEN in 1871.  It was Wilhelmina’s second marriage - she had married Andrew SCHON in Bornholm, Denmark, four years earlier.  Schon was a master mariner and secured work in New Zealand. Wilhelmina joined him in 1868, and they settled in Napier. Their son Johan was born a few weeks after Wilhelmina's arrival.   On 19th June 1869, Andrew’s ship the Grayling foundered during bad weather south of Wairoa, with the loss of all crew.

After Andrew's death, Wilhelmina took in washing to earn a living, and through one of her customers, met Danish man Thorwald Brill, a farrier who had emigrated to New Zealand from Copenhagen around 1863.  Thorwald was a Sergeant in the Armed Constabulary at Tarawera, and after they married the family went to live in the military camp there. Tarawera was a remote outpost on the Napier/Taupo road: at first it was a Maori village, then it became a military stockade, and finally an important coach stop on the Napier to Taupo route.  Between 1872 and 1886 the couple had eight children: Emelia (1872), Charles (1873), Anne (1874), Hans (1876), Gertrude (1878), Dorothea (1880), Alexia (1882), Frederick (1884) and Arthur (1886).

In 1883 Thorwald advertised in the Hawke's Bay Herald that he had taken over the Tarawera Hotel, offering “Good accommodation, and every attention will be paid to the travelling public.  Good stabling and paddock.”  Visitors in 1891 reported of the “stalwart host and his pleasant family, who vie with one another in their efforts to make the visitor comfortable” (Hawke's Bay Herald, 13 May 1891). There were two hot springs with reputed curative properties in the area, with the nearest to the hotel about a mile away that sported a boarded bath, built jointly by Thorwald and his neighbour, Hebberley.  Bathing was free, and the hotel provided towels “but visitors are expected to bring their own ailments.” During his time in Tarawera, Thorwald became a naturalised citizen, receiving his Letter of Naturalisation in 1884.

In the middle of 1891, the family moved closer to Napier and took over the Petane Hotel[i], described at the time as a pleasant summer resort. In 1896, the family moved to the Ferry Hotel, Western Spit (north of Npier), and then the Royal Hotel in Carlyle Street, Napier. By 1900, the Brills had moved south to Wellington, where Thorwald worked as a boarding house keeper and grocer in various locations in the city, until finally settling at 78 Todman Street in Brooklyn, when Thorwald was working as a labourer.

Their second youngest son Frederick was working as a contract labourer in Tolaga Bay by 1905, and stayed in the area for some years. By 1914 he was registered to vote in Pukeatua (in the Waikato) where he worked for Mr G C Nevill as a bushman.  At this time the area around Pukeatua was being cleared and developed, and many young single farm workers were brought in from around the country (and beyond).  Frederick's married brother Hans was also living in the area.

On 6th January 1915 Frederick enlisted at Trentham.  He was 30 years old, 5 foot 11 inches tall and weighed 159 lbs, with a dark complexion, brown eyes and black hair.  He had a scar from having his appendix removed, and on the head of his right fibula. He had good sight and hearing, his teeth were “Good, all artificial”, and was passed as fit.  His attestation record noted he'd spent three years with the Wellington City Rifles before moving away from the city.  Established in October 1867, the Wellington City Rifles was one of five volunteer companies in the city.

On enlistment, Frederick joined B Company of the 4th Reinforcements, and departed New Zealand on 17th April 1915. The 4th Reinforcements first went to Egypt arriving 25th May 1915, then onto Gallipoli arriving 6th June 1915.  Three days later, Frederick was assigned to the Wellington Infantry Battalion, who were instrumental in the attack on Chunuk Bair on 8th August.  He was admitted to the NZ field ambulance on 21st August after contracting enteritis. Living conditions on the Gallipoli Peninsula made it difficult to keep a high level of hygiene, and disease was prevalent.  A dysentery (inflammation of the colon, or large intestine) epidemic broke out in August 1915, along with enteritis (inflammation of the small intestine) and was responsible for a large proportion of causalities evacuated due to illness.

Frederick rejoined his unit at Mudros on 25th September.  In December the battalion was withdrawn from the Dardanelles and transported on the Simla to Alexandria.  In March the following year, Frederick was transferred to No 2 Machine Gun Company based at Ismailia.  On the 6th April 1916, the company, along with the rest of New Zealand Division, embarked for France.  The Division was involved in the Battle of the Somme from September that year.

On 30th March 1917, Frederick was awarded the Military Medal for acts of gallantry in the field.  The citation in the London Gazette reads:
During enemy raid on our trenches at N.36.a. and N.M.36.b Wulverghem on 24th March 1917. Private Brill set a splendid example of courage and devotion to duty in keeping his machine gun in action throughout a most intense bombardment lasting from 4am until 5.15am and in keeping the gun firing during the time he and the remainder of the team (two of them were wounded) were being bombed from the rear by the enemy, six of whom had succeeded in entering our trenches. Private Brill was successful in so severely wounding one of the enemy as to prevent his return to the German lines, thus giving us the means to ascertain identification of enemy units employed to carry out the raid.
(London Gazette, 11 May 1917)

On the 12th May, Frederick received a field promotion to Lance Corporal.  From the 7th to the 9th of June, the New Zealand Division took part in the capture of the Messines ridge.  The New Zealanders captured the village of Messines with little difficulty, but later suffered heavily from German bombardment, with the loss of more than 700 men.

The work of the Corps during the Battle of Messines was very effective, and won high praise. The barrage had been well prepared and well carried out. Perhaps the quick response to the S.O.S. calls and the deadly havoc the responses caused was the most commendable work of the Corps, and did most to help establish the confidence of the infantry in the machine gun and the gunners.
The Companies of the Corps, with the exception of the Divisional Company, were not able to rest for long. The 4th Company relieved the 6th Motor Machine Gun Company in the Le Bizet sector on 12th June, and the 2nd Company and one section of the 3rd Company on the same day went forward to assist the 2nd Brigade and the 4th Battalion 3rd (Rifle) Brigade in the advance that was planned to clear the low-lying land north of the River Lys as far as La Basseville. On the night of 13th June these guns kept up a protective barrage as the infantry pushed forward, and were fortunate in escaping the effects of the heavy enemy bombardment that fell soon after the infantry advance began.
Throughout the day of the 14th the gunners maintained their positions, but were moved forward to again assist the advance planned for the 15th. The 2nd Company had heavy casualties on the 15th in consequence of the heavy enemy shelling, but maintained their positions.
(Chapter VI — The Battle of Messines, With the Machine Gunners in France and Palestine, NZETC)

On the 14th of June No 2 Machine Gun Company were maintaining position at the Catacombs.  Officially called Hill 63 Dugouts, they were constructed during 1916 by the 1st Australian Tunnelling Company as shelter during the Battle of Messines.  A massive system of underground bivouacs, the Catacombs held accommodation for over 1200 men in 19 “streets” lined either side with bunks. Senior officers had rooms with two bunks and a table, and it also housed electrical units for lighting and signal equipment, a canteen and a small hospital.  During 1917 and 1918, almost every unit passing through the area spent a night in the Catacombs of Hill 63.

At 7.30pm on the 14th, an advance was made by the infantry under cover of artillery and machine gun barrage. The following day, considerable bombardment took place on the positions gained during the night and casualties occurred, with 4 killed, 7 wounded, 1 gassed and 1 missing.  One of those killed was Lance Corporal Frederick Brill.  His remains were not found, so Frederick is named on Stone 41 on the Messines Ridge (New Zealand) Memorial. The Messines Ridge (New Zealand) Memorial to the Missing is situated within Messines Ridge British Cemetery, which is located 9.5 kms south of Ieper (Ypres) and commemorates over 800 soldiers of the New Zealand Expeditionary Force who died in or near Messines in 1917 and 1918 and who have no known grave.

Frederick is also remembered in Pukeatua.  The small farming community’s war memorial church is one of only two such churches in New Zealand.  It was established in 1955 by the community as a lasting reminder of the young locals who lost their lives in the two world wars. (The other church was built in 1954 in Tutira on the East Coast.)  Twelve out of the 44 Pukeatua men who served overseas were killed.  Amongst the names inscribed is “Lieut” F. Brill.  Also on the Memorial is the name J. Futter, who is named on the Newlands memorial.

Frederick’s parents outlived him by only a few years.  His mother Wilhelmina died on 26 November 1919, and his father Thorwald died the following year on 5th May.  Both were buried in Karori Cemetery.  Frederick's scroll and plaque were sent, on the 12th February 1921 and 27th January 1922 respectively, to his eldest brother Charles in Aokautere, Palmerston North.

Researched and written by Margaret Gaffney

Excerpts from With the Machine Gunners in France and Palestine shared under the Creative Commons Attribution-Share Alike 3.0 New Zealand Licence.


[i] Petane is a small settlement about 7 kilometres north of Napier. 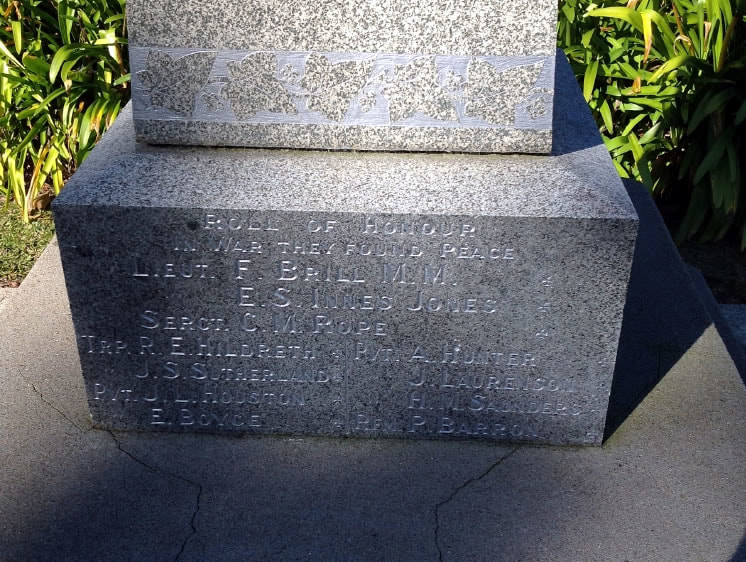 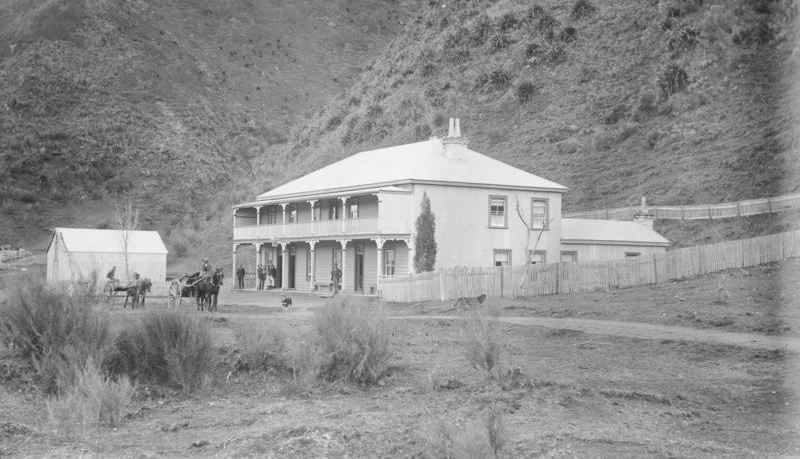 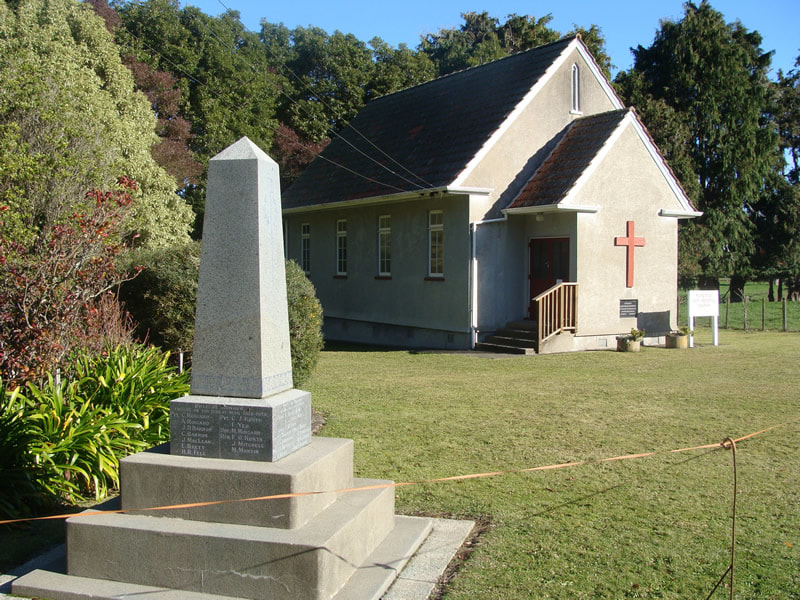 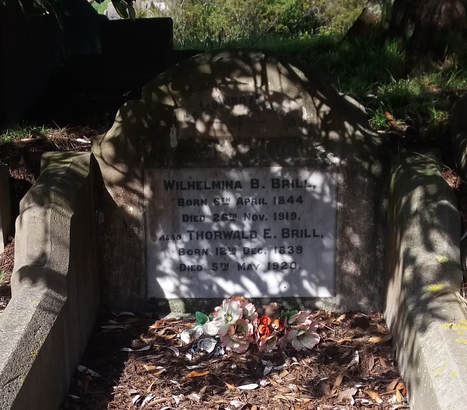 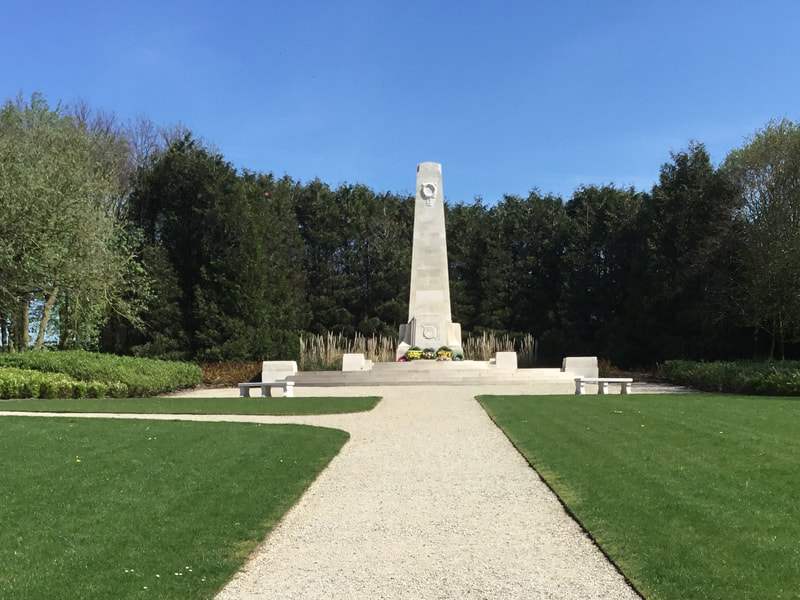 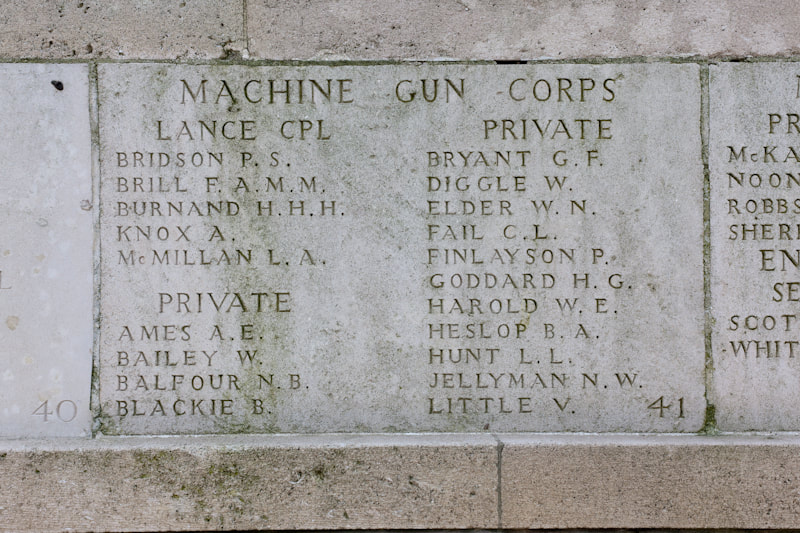