Arthur TROTTER was born on 20 July 1896 at his parents’ home in Makara.  His parents were William Robert Trotter and Margaret Jane BOWLER, who married on 27 October 1886.  Arthur was the fourth of five children born to William and Margaret between 1888 and 1901, three daughters and two sons.  Margaret Jane was the daughter of James Bowler, born in Lancashire, and Elizabeth DEERING, possibly born in New Zealand, who married in the Hutt Valley in 1858. William was the son of Peter Trotter, born in Bedford, England and Mary BURNETT, born in Midlothian, Scotland, who married in 1848 at St Mathias, Makara.

William Trotter’s sister, Sarah May Trotter, married Henry James Monaghan in 1875, making William uncle to Harry Mongahan, who died of wounds on 1 August 1917 following the action at La Basse Ville. Arthur and Harry were first cousins, a six year age gap between them.

William Trotter died aged 39, on 4 March 1902 after a short illness, leaving his wife and children bereft. The youngest, Elma, was a baby of 7 months, the eldest, Amy, 14 and Arthur was just 6 years old. William was buried in the St. Matthias Anglican Church Cemetery, Makara.

Arthur attended Makara school, as had John Jervis, Harry Monaghan and Louis Sievers. He started school on 23 July 1901 and reached Standard 6 staying on a further year before leaving school bound for home on 28 November 1910, aged 14. He worked on the family farm helping to support his mother and sisters for the next 7 years. His mother, however, died in August 1914, joining her late husband in their plot in St Matthias Church Cemetery.

Arthur went for his medical on 2 October 1917 and was officially accepted into the army on 17 October 1917. He was 5ft 6 & ½ inches tall, with black hair, grey eyes and a dark complexion. He was in good health, passing the medical with an “A” rating, the only distinguishing feature was a scar on his back from the removal of a hydatids cyst. Arthur was part of the 35th Reinforcements Wellington area reported in the “Evening Post” on 23 October as having gone into camp the previous week.

Arthur left New Zealand on Friday 8 February 1918 on the “Ulimaroa”, the last of the men named on the Makara memorial to leave, and the fourth who sailed on this particular ship (Karl Pedersen, Harry Monaghan and John Bryant being the others). It was transport H.M.N.Z.T. No. 100, carrying troops of the 34th Reinforcements and 26th Reinforcements Maori Contingent.  A magazine, “The Link” was produced of the voyage, similar to the magazine “The ulima-roarer: a collection of wails & fishy stories, etc. from the Indian Ocean” produced on Harry Monaghan’s voyage, containing photographs, caricatures and writings by the men. “The Link” also listed the 1000 or so men on the voyage by their platoons and Arthur was part of the 11th Platoon in “A” Company.

The Ulimaroa arrived at Liverpool on Friday 29 March 1918 and Arthur was posted to the Rifle Brigade camp at Brocton, arriving there the same day. Because of the camp’s location on the northern edge of an area of woodland called Cannock Chase in Staffordshire, it was ideal for more intensive rifle training.

Arthur was hospitalised on 1 May with influenza. This was part of the first wave of “Spanish” influenza to strike around the world, which affected the both Allied and German armies on the Western Front and was later to return in a deadlier strain to kill millions before the end of 1918. Arthur remained in hospital for two weeks, being discharged on 14 May. It is possible that he took a long time to recover from this illness, as it was not until October that he was deployed to France.

Arthur left for France on 10 October 1918 and joined the Battalion on 17 October, being posted to A Company. This was the 1st Battalion of the 3rd NZ Rifle Brigade. The Rifle Brigade had taken part in successful actions on 8th and 9th October and went into billets at Esnes on 10 October. These were in houses and the first time the Brigade had been billed thus for 8 months, having had to content with dugouts, and occasional dilapidated huts, The villages were deserted but undamaged by warfare and the men were able to use the stoves, raid the gardens and for some, sleep in feather beds.

While they were out of the line, the Brigade reorganised and refitted, and carried out training. Reinforcements were slow to arrive and the units were under strength. Arthur would have been one of the slow trickle of reinforcements arriving at this time.

The Rifle Brigade moved forward to Beauvois on 19 October, and to Vertigneul on 24 October. This was part of the Allied advance, a series of attacks since August that had almost defeated the German army. Now the next phase was cut off the German lines of retreat and the battle of the Sambre was planned to start on 4 November, with the New Zealand Division being responsible for capturing the town of Le Quesnoy and its garrison of soldiers.

Le Quesnoy was a medieval town sitting on high ground between the Ecaillon and Rhonelle rivers, with fortress walls, ramparts and a moat consisting of two ditches surrounding the town. It had a population of 5,000 and had been in German hands since August 1914.  The Germans also held the Cambrai railway line to the west of Le Quesnoy, and had a strong presence in the area around the intersection of the Valenciennes–Cambrai railway lines, immediately to the north-west of the town.

The walls of Le Quesnoy (https://en.wikipedia.org/wiki/Capture_of_Le_Quesnoy_(1918))
On the night of 24/25 October the Rifle Brigade relieved the 2nd Brigade in the line at Le Quesnoy. There were constant patrols, day and night, over the next few days and fierce enemy artillery and counter-attacks, including gas-shells deployed. On 31 October, a party drawn from 1st Battalion “A” Company, Arthur’s unit, with the Somersetshires, engaged in a successful action to scout out the enemy lines; it is not recorded in his file whether Arthur was part of this action. This was the last of the raids to gather information for planning the attack on Le Quesnoy.

By midnight on 3 November, all units were in place for the attack. 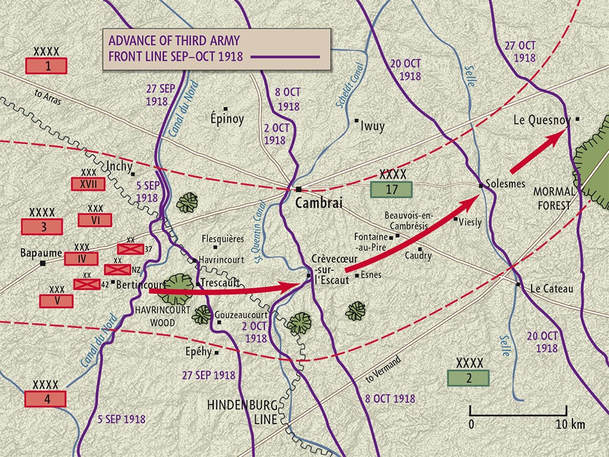 https://nzhistory.govt.nz/media/photo/advance-victory-1918-map
The attack started at 5:30am. The three battalions in the line (1st, 4th and 2nd) would advance simultaneously and capture the railway line running roughly parallel with their front. Arthur’s battalion, the 1st, was to the south of the 4th Battalion and was to pivot on its left flank near the railway, bringing up its right to the Landrecies Road, so covering the town from the south-west.

By 7am the first phase had been accomplished, not without considerable shelling including gas shells. In places the smoke from the shelling was so thick that compasses had to be used to establish direction.

By 9:30am Le Quesnoy was encircled, but the 1500 strong German garrison held the Rifle Brigade at bay with machine gun fire until late afternoon, before the ramparts were scaled and the troops entered the town.

It is not known at what point Arthur died on 4 November 1918.  He was one of 43 Rifle Brigade men killed that day, out of a total of 122 New Zealand soldiers who died. The capture of Le Quesnoy was the last major engagement of the war for the New Zealand Division.[i]
Arthur was buried at Romeries Communal Cemetery extension, Nord, France, Cemetery/ memorial reference: IX. A. 19.

His medals were sent to his brother, Henry Samuel Trotter, who along with his brother William and sisters Amy, Elsie and Bertha, were the beneficiaries of his will.

On the Auckland Cenotaph site, Arthur is recorded as Arthur Joe Trotter, the only place the name Joe appears in the records consulted. This may have been his nick-name.


There is a well maintained memorial to Arthur Trotter and his parents in the St Matthias churchyard, Makara, Wellington. At the 21 August 1921 consecration of the new St. Matthias' Church a richly ornamented Altar Cross was given by the Trotter family in memory of Arthur. www.findagrave.com Memorial# 175151204

Researched and written by Kaye Batchelor


[i] The ramparts of Le Quesnoy clearly made a frontal attack undesirable and artillery could not be used on the town, due to the presence of the civilian population. During the afternoon of the 4th Second Lieutenant Leslie Averill, the intelligence officer for 4th Rifle Battalion…. was able to locate a route to a section of the ramparts that appeared unmanned and was not under fire from the defenders. He was ordered to force an approach. With the benefit of covering mortar fire, Averill and a platoon of the battalion reserve company managed to cross the moat and found themselves at the inner ramparts. With the aid of a 30-foot (9.1 m) ladder supplied by the Divisional Engineers, Averill was able to ascend to the top of the ramparts, closely followed by the platoon commander. With his revolver, Averill fired at two Germans manning a guard post, forcing them to cover, and the rest of the platoon joined him. With an entrance through the defenses secured, Barrowclough and the rest of the battalion used the ladder and entered the town shortly afterwards.
Abridged from https://en.wikipedia.org/wiki/Capture_of_Le_Quesnoy_(1918)
The town of Le Quesnoy celebrates its liberation every year, and strong friendship links between Le Quesnoy and New Zealand have been maintained for 100 years, and continue to grow and develop.

“Yesterday a large congregation assembled in St. Mathias's Church, Makara, when a very handsome brass altar cross was dedicated to Arthur Trotter; of the N.Z.R.B., who was killed in action, November 4, 1918, during the battle of Le Quesnoy. The memorial, which was made in England, was the gift of the Trotter family. The vicar preached from the text St. John, 12, 32.” 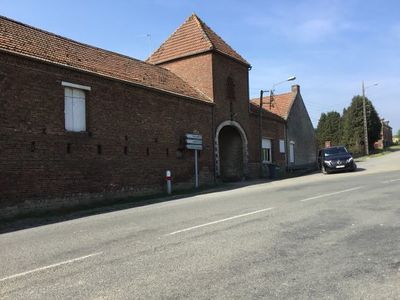 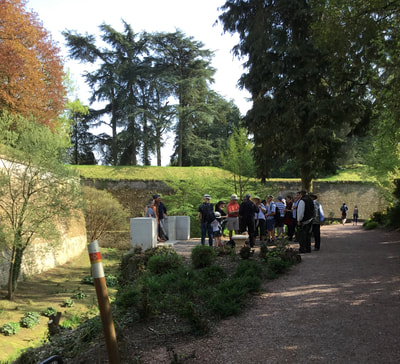 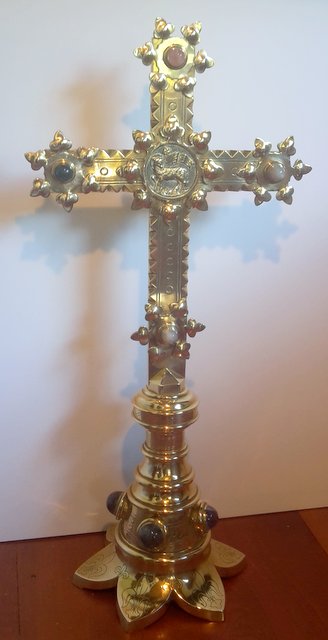 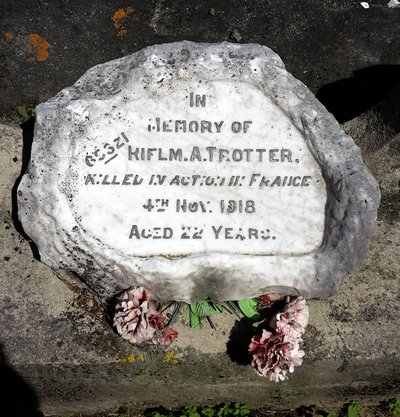 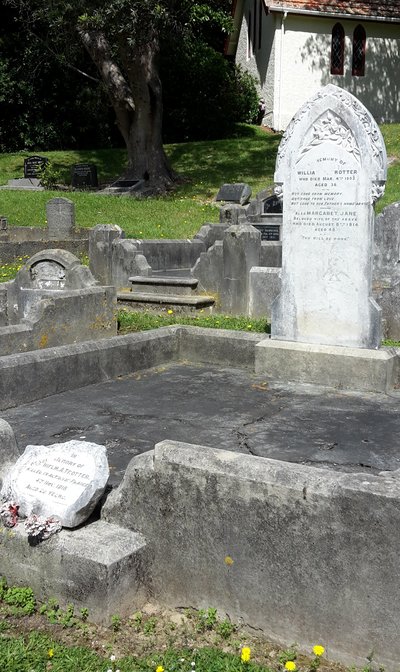 Photos of St Matthias cemetery and altar cross taken by John Munro and posted to Findagrave.com